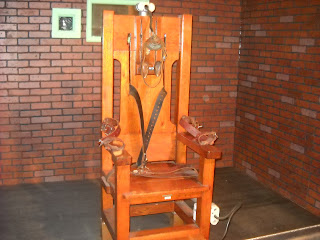 A young black man is railroaded by the criminal justice system and locked away for a crime he didn't commit. Doesn't sound that unusual anymore, does it?  Because as we all should know by now, it's not.

Just Mercy is based on the true story of Walter McMillan, who was wrongly convicted of the murder of a young woman in Alabama in 1988. The only alleged evidence against him was the testimony of a convicted felon who claimed to have witnessed the crime. McMillan spent six years on death row.

Director Destin Daniel Cretton spins an inspirational yet appalling tale of how young Harvard law school graduate Bryan Stevenson worked tirelessly to prove his client innocent--based upon Stevenson's 2014 memoir. Four appeals were denied by the Alabama Court of Criminal Appeals from 1990 to !993. But attorney Stevenson never gave up.

The movie spills over into melodrama in one of the courtroom scenes, and Just Mercy suffers from some mediocre acting performances, with the notable exceptions of Jamie Foxx as McMillan, and Tim Blake Nelson as the criminal whose testimony (which he later recanted) put McMillan behind bars. And at two and a half hours, this tale could have been told in  more economical fashion.

But in my view, the quality of the film is almost irrelevant. It's the story it tells and what it reveals about racial prejudice, collusion among law enforcement, prosecutors, and judges that indicts the whole lot of them--not only in this case in Alabama, but assuredly in many other instances as well. As the film reveals at the end, for every nine people executed in the United States, one innocent person has been exonerated. We'll never know how many innocent individuals went to their deaths at the hands of the state due to inadequate or incompetent legal representation. (Did you know that the barbaric electric chair was employed in the U.S. until 2008, when the last state where it was still in use dropped it?)

For the sobering reality it reveals, Just Mercy should be required viewing for everyone.

It's not a particularly great film, but it's an important film. It's a stinging indictment of capital punishment, as well as our flawed and too often corrupt criminal justice system.

Just Mercy is an uncomfortable film to watch. It is unrelenting when it comes to showing just how unjust the world can be. Especially if you're black. Forget the Harvard education, the JD after his name, our idealistic hero still must suffer through a strip search before he can interview his client. Yes, the film was a bit too long but so was the agonizing process of obtaining Walter McMillan's freedom.

I was unfamiliar with the actor who played the lawyer. But thanks to IMDb, I now know his name is Michael B. Jordan (the B stands for Bakari which means "noble promise" in Swahili) and he's no relation to the basketball legend. I felt he did a credible job and when they showed the real Bryan Stevenson during the end credits, I could see a definite physical resemblance. Whenever a movie is based on a true story, I love how they show the "real" people at the end.

The story is so horrifyingly gripping that the musical score is hardly noticeable. But I noticed it. And I agree wholehearted-ly with the description I read of the music "showing great emotional nuance."

The only thing that didn't ring true for me—although in real life it happened that way—was the sudden change of heart by the prosecuting attorney. Maybe it's the fault of Rafe Spall for playing the part of a smarmy southern bigot so convincingly. (Ironic that Spall is English.)

Not since that unforgettable scene in "The Green Mile" (where they forgot to dampen the sponge) has the sight of an electric chair been so....er....electrifying. (God, we can be such inhuman humans!)

The lady I saw this movie with said the book by the same name was "absolutely brilliant." Well I say the movie is, too!