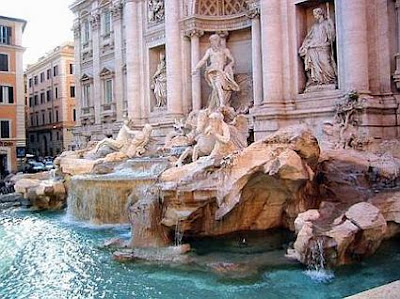 Ah, the ambience of Rome. The fountains, the statues, the ruins, the pigeons, the pigeon poop...WAIT A MINUTE! Why does a movie called When In Rome take place primarily in New York City? In fact, the actual scenes of Rome are few and far between--just like the laughs in this dreadful, made for nothing but profit disappointment.
Geez, I really need to start being more selective.
Kristen Bell is Beth, curator at the Guggenheim museum in New York. She travels to Italy to attend her sister's wedding. Sis is getting hitched to this Italian guy she's known all of two weeks. (Those Mediterranean dudes ARE persuasive!) Still reeling from a failed relationship, Beth gets drunk and totters into the Fountain of Love, where she lifts five coins that were tossed there by hopeless romantics looking for amore. But legend has it that if you take someone's coin, that person will fall head over heels for you.
Thus begins an odyssey where these four weirdos, who've become magically smitten, stalk Beth back to New York. What transpires there is supposed to be funny, bit it's not. The fifth coin apparently belongs to sportswriter Nick, (Josh Duhamel) best man at the wedding, where he and Beth have a mild flirtation. But then, Beth sees him with this Italian babe...
Cut to the chase. Will Nick and Beth get on the same page long enough to end up in connubial bliss? Or will the four weirdos who are pursuing her around New York (Danny DeVito-- as a sausage magnate--is one of them) become such a distraction that our romantic leads fall short of the runway? (Or in this case, the bed.)
In my opinion, neither Kristen Bell nor Josh Duhamel have the charisma to carry a film--even one that falls flat on its face in the middle of a fountain where naked cherubs are piddling on it. Watching When In Rome has made me so disgusted about what some people are willing to do just to make a profit, I'm vowing not to watch another formulaic romantic comedy this year... unless, of course, Zooey Deschanel is in it.
GRADE : F
Posted by Timoteo at 5:26 PM No comments: Links to this post