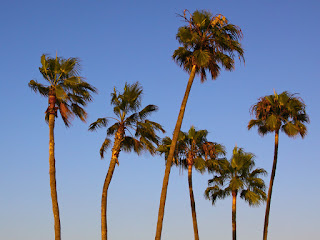 Chiron is a skinny kid. A real quiet kid. He gets bullied at school. His mom is a crack whore, so no father figure. On top of that, Chiron has questions about his sexual identity. One day a man in his Miami neighborhood finds Chiron hiding out from some kids who are taunting him. The man is a good man. He has fatherly instincts. He becomes something of a surrogate dad to the boy. Oh yeah, the man is a dope dealer. Nobody's perfect, and ya gotta do what ya gotta do to get along in this world, eh? But it's the same shit he dispenses on the corner without a prescription that feed's Chiron's mother's habit. Life can be so ironic. And there you have Moonlight.

It's a coming of age story. It's a coming out story. Two for the price of one. Though it moves along sort of aimlessly. Like Chiron. Like his mom. Like the man who has taken Chiron under his wing. But there are plenty of hard hitting dramatic moments to keep you focused on what eventually develops into a poignant tale about a lost soul making his way through this world. And a love story of sorts. But the full brunt of that won't grab you until the heart-wrenching ending.

Moonlight is told in three parts--following  the protagonist, Chiron, from young boy, to teenager, to young man. Alex Hibbert, Ashton Sanders, and Trevante Rhodes do the honors respectively. As one might expect, it is Rhodes' portrayal of the physically beefed up, yet emotionally vulnerable man Chiron has become that provides the most depth of character in what is a highly character driven film. Rhodes should receive an Oscar nod for supporting actor...if there's any justice in this world that is...but then the film reminds us that, of course, there isn't.  Naomi Harris also shines as Chiron's ever-desperate-for-her-next-fix mother.

The creative camera work--there are more intimate close-ups than you'll find in a spaghetti western--will tell you you're in for something different with Moonlight from the get-go. You know that spinning 360 merry-go-round shot that is normally reserved for two lovers getting all goo goo eyed with one another? Director Barry Jenkins gives us that with two crack dealers just hanging out on the corner--for what reason I'm not sure, but I liked it. And the soundtrack. From languid hip-hop beat...to lush orchestral arrangement...to golden oldie love ballad. It surprises and delights at every turn.

After every movie Tim and I see, I ask him when I can start nagging him about sending me his review. It usually takes him a couple of days to put his thoughts in order. Most of the time, my opinions are instantaneous. "It's great!" "It sucks!" "I liked this part but I hated the ending." In the case of Moonlight, I'm actually glad Tim took his time. It gave me a chance to change my mind. (Sort of like when you first meet someone you think is terrific but, in retrospect, turns you off.)
Moonlight is definitely a "politically correct" film and will, in my opinion, receive kudos (and probably Oscar votes) from both the African American and LGBT communities. But for me, it was too fragmented. And when you have a main character who is painfully mute—justifiably so—it's difficult to wait...and wait...and wait for him to speak. I also found the transition from young black boy, to gawky teenager, to muscle-bound adult hard to follow. And to make it even more confusing, the main character used different names during these transitions.
Be that as it may, there were parts of this movie that had me totally involved. Emotional moments with his junkie mom begging him to love her; scary moments when the school bully taunted and tormented Chiron; touching moments when, as a vulnerable teenager, he questioned his sexuality. But overall, it had too many plotlines and too little focus.