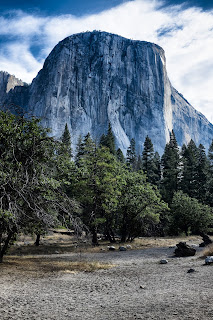 Some folks need to risk death to feel truly alive. I have no need of such drastic measures. Falling out of bed in the morning is enough to jolt me awake and be fully present in the moment. But some people need more. Much more.

Enter Alex Honnold, rock climbing enthusiast. Ascending to mountaintops the normal way, with ropes and harnesses, isn't good enough for him. He wants to be the first person to inch all the way up the 3000 foot sheer granite face of El Capitan in Yosemite National Park without any of that "sissy" equipment that normally provides the difference between life and death in such endeavors. Alex isn't like the rest of us. He needs a higher level of stimulation, as a telling MRI of his brain reveals.

Free Solo is the documentary that follows him from the planning stages of the climb through the actual attempt itself. Along the way we learn quite a bit about the young man, a healthy eating vegetarian who lives in his van and travels around practicing his "upwardly mobile" lifestyle. It is clearly the most important thing in his life because he indicates that when push comes to shove, he prefers a rock face over a pretty face.

Enter Sanni McCandless, a young woman he met at one of his book signings. They hit it off...one thing leads to another...and now she's become a part of his life as they cohabitate in the van--and though she's not a professional climber, she's getting more and more into it with him.

There's an undercurrent of how their ongoing romance may affect his concentration and dedication to his sport. (I flash on Burgess Meredith telling Sylvester Stallone in Rocky: women weaken legs!) Any lack of concentration or attention to detail during such a harrowing free solo climb could easily result in it being curtains, and to drive home the point we are shown a lengthy list of climbers who perished during such attempts.

Free Solo is as gripping and compelling as any suspense thriller I've ever watched. With dizzying and breathtaking cinematography that we get from every angle. I purposely did not do research on the film before seeing it, so I didn't know what the ultimate outcome of Honnold's foolhardy El Capitan adventure would be, and found myself with sweaty palms throughout the second half of the film. And yes, I say foolhardy, because the guy has a girlfriend who looks like a model and his whole life ahead of him.

For most of us, that would be enough. Unless getting into the record books means more to you than life itself.

A nail-biter for sure. And like one of the camera men filming this inconceivable adventure, I had to look away during the final ropeless climb. I went to an evening show and the audience was filled with young people who were vicariously climbing along with Alex Honnold. I was not. But I was admiring his single focus, his dedication and his passion.

If Free Solo wasn't based on an actual event (nominated this year for a Best Documentary Feature award), I'd find it hard to believe that any mom or girlfriend would be so supportive. I sure wouldn't be!

Some of the photography looked like abstract art. And the majesty of El Capitan, as captured so beautifully on film by co-director, cinematographer and co-producer Jimmy Chin, took my breath way. (When I remembered to breathe!)

Tim McGraw's song "Gravity" plays as the end credits roll. As I end my review, I'd like to quote some of them: "Look what you have overcome to get here...Look at the distance you've run...The doubt that you push down...Fear you have drawn out when they said it couldn't be done..."

PS – If you suffer from vertigo, avoid this film at all costs.