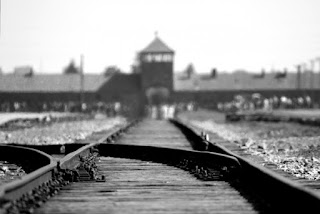 
In 1996, American academic/historian Deborah Lipstadt was sued for libel by British historian David Irving for characterizing him in her book as being a holocaust denier. Among other "Nazi friendly" assertions, Irving had maintained that there were no gas chambers at Auschwitz. Despite the damning nature of his stated positions, Irving sued for damage to his reputation, essentially denying that he was a denier.  Denial is the docudrama of the ensuing trial, which took place in Britain in 2000.

Given the subject matter, I was expecting fireworks, but for the most part, Denial is as staid as the British courtroom where most of the "action" takes place. He-said-she-said. The fascination that does exist revolves around the larger issue: By having to defend her statements about Mr. Irving, Lipstadt essentially has to call the holocaust as a witness to prove its own existence.

In preparation for the trial, Lipstadt and her team visit the real Auschwitz--a desolate looking place that time has softened into a haunt for ghosts. You must use your imagination now--not hard to do--to conjure up the unspeakable depravity of what took place there. It's a sobering moment.

It's a pedestrian turn for previous Oscar winner Rachel Weisz, as Lipstadt. When she's pleased, she's bubbly. When she's perturbed, she's frowny. But there's no nuance or subtlety of emotion. And an inordinate amount of time is spent drinking wine with her chief defense strategist, Richard Rampton (Tom Wilkinson). Maybe it was real wine. Wilkinson gives a more fleshed-out performance as he calls the shots for Lipstadt's defense strategy. Timothy Spall, as David Irving, is pompous and jowly, and comes off as being more obnoxious and annoying than villainous.

Conspiracy theories abound. Social media is crawling with them. 9-11 was an inside job. The moon landing was fake. The Sandy Hook massacre was staged. On and on. Few of them ring of credibility to the logical mind--the JFK assassination notwithstanding. It appears obvious that there was more to that than just a lone malcontent named Lee Harvey Oswald. But compelling evidence is in play there. The holocaust denier is a breed apart. He tries to tell us that we didn't see what we saw in all of the ghastly newsreel, documentary, and photographic evidence that exists. Not only does he insult our intelligence, he aligns himself with a dark energy that needs to fall back into the cesspool of history from whence it came.

I was expecting more HEAT in Denial...something on the order of what I just felt in penning the preceding sentences. But for the most part, it left me cold.


JILL'S TAKE
Finally, Tim and I disagree! (But not by much.) I went to this film, curious to know how holocaust deniers rationalize their beliefs. And right at the beginning, Rachel Weisz as Professor Lipstadt points out the four explanations deniers give. The one that really made my eyes pop? It was a publicity stunt promoted by the Jews to promote Israel. (Are your eyes popping now, too?)
I knew going in that Denial would be a courtroom drama but I found the subject matter so preposterously fascinating that I never got bored. I also learned a lot, not just about holocaust deniers but how different the English legal system is from ours. There, you're basically guilty until proven innocent. All of the actors involved did admirable performances but I especially admired how fanatic Timothy Spall was David Irving -- whose rabid intensity out-Hitlered Hitler's.
On a personal note, a few nights later I was having dinner with some friends and mentioned Denial in passing. One of them then told me about an interview she'd read in Hadassah Magazine where Rachel Weisz talked about the fact that all her own relatives perished in concentration camps.
Talk about art imitating life!

Posted by Timoteo at 1:34 PM No comments: