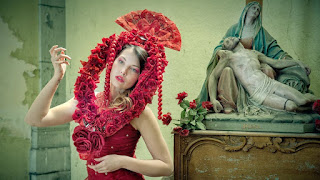 There is a mindset that we should indulge the "mad geniuses"--and all of their idiosyncracies--because of the contribution they are making to their art, or whatever their chosen field of endeavor may be. Phantom Thread is two plus hours of such indulgence--a character study of Reynolds Woodcock (Daniel Day Lewis), dressmaker and designer for the rich and famous in 1950s London, who reveres his deceased mother in a way that suggests he might have been a mama's boy--and that may provide some insight into his difficult nature. He's obsessed with his work, and therefore annoyed by anything that distracts him from it, and will lash out at you on the slightest provocation.

Woodcock, a confirmed bachelor, is easily bored with women. Until one day he is smitten by a young girl named Alma (Vicky Krieps), whom he brings into his world as his muse and companion. She's an extremely patient girl--she would have to be--and puts up with his crap because she sees something in him that anyone on the outside--such as the film viewer--would miss. But his petulance wears on her after a time, and she discovers a clever but dangerous way of cutting him down to size--of making him human again and realizing how much he really needs her.  Who wears the pants in the family isn't always apparent upon first glance.

Phantom Thread is all about the characters, and they are richly drawn. Daniel Day Lewis goes out with a bang (he says he's retiring from making movies) with this portrayal of a man at war with his own obsessions. Vicky Krieps, a 34 year-old find from Luxembourg, is perfectly cast in her role as his feisty paramour. She has the face of a Madonna (not that one), and she has the rare ability to convey emotion with economy...the long gaze that gives nothing away initially, but indicates the wheels are turning furiously inside her head. And Lesley Manville, as Woodcock's sister and adviser, Cyril. Behind her prim demeanor, she's tough as nails.

But not having the same emotional investment in Reynolds Woodcock that Alma did, and still having to put up with all of his boorish behavior, I found Phantom Thread to be as tedious as was the relationship between the two of them...just wishing that he would bite the big one so I could scoot out of there and go get some lunch.

I had the pleasure of seeing this film with, not one, but two shrinks who enjoyed these characters' skewered psyches a lot more than I did. The first half was so slow that I feared I'd fall asleep and disturb the audience with a loud and unladylike snore. (But they were probably nodding off, too!)
If Phantom Thread had started the moment our young lovely discovered (and acted upon) a culinary way to chill out her unpredictably cruel lover, I wouldn't have been so droopy-eyed. Still, I would've found more than a thimble full of flaws. My shrink friends were able to enjoy the way the director/writer Paul Thomas Anderson captured the true essence of OCD and sado-masochism. But even they disagreed over whether certain scenes were fantasy or reality. Me, I don't like murky messages; endings that leave the viewer puzzled. (Or, in my case, pissed off!)
Two things I did like: Jonny Greenwood's score (eclectic and a definite mood-setter); and whoever was in charge of the sound. I especially appreciated it when Woodcock would fly off the handle at breakfast because of the noise, i.e. bread being buttered, coffee being poured. These sounds were heightened so we heard them from his ears. A brilliant touch, really.
Still, I'd much rather watch "Project Runway."
Grade: C -

Posted by Timoteo at 7:53 AM No comments: