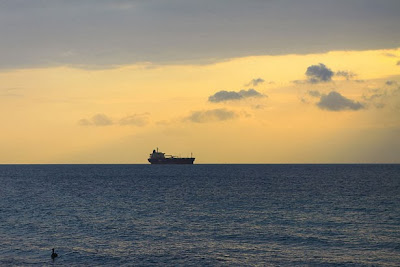 Tom Hanks gets upstaged by a young Somalian immigrant with no prior acting experience. Fancy that. Which is not to say that Hanks doesn't do a hell of a job as the skipper of the  Maersk Alabama in Captain Phillips, based on the true story of the U.S. cargo ship hijacked by Somalian pirates in an international incident that made headlines in 2009. It's just that Muse (Barkhad  Abdi)  is so authentically lean, hungry, and monomaniacal as the leader of the four young psychopaths who commandeer the ship, hoping to garner a big ransom payout.  While it's hard to fathom that this is Abdi's  acting debut, I find it less difficult to speculate that he may have some actual pirating experience on his resume! (A prerequisite for getting the part?)

Captain Phillips is a full-speed-ahead action tour-de-force.  It never pauses to wax philosophical, or poke around much inside the characters' heads--except for a brief moment  near the tension-filled climax when Phillips looks at Muse and tells him there must be something else he could do with his life.

It's a gritty and grueling turn for Hanks who, as Captain Richard Phillips,  must try to outwit capricious desperadoes with automatic weapons trained on him as best he can. For the most part, he is up to the challenge. The only stumble is that the Irish accent he is affecting gets totally submerged when he has to shout. The louder he shouts, the more the old familiar Tom Hanks voice that we know and love returns. Not a biggie. You may not even notice it.  But I notice stuff. That's why they pay me the big bucks.

Going in, I vaguely remembered this incident from four years ago, (a long time for me to try to remember anything) and I didn't recall how it all played out in the end, which I'm certain made this viewing experience more thrilling for me because, as I have stated before, I AM BORED BY HISTORICAL DOCUDRAMAS WHERE I ALREADY KNOW WHAT HAPPENED!!! So I would say that if the Maersk Alabama incident is fuzzy in your head as well, you should enjoy Captain Phillips tremendously!

If I had to devise an acronymic blurb for CAPTAIN PHILLIPS, it would read: Terrifyingly Exciting Nautical Saga Enthralls! Yes, this film is definitely T-E-N-S-E. I went to see it with two gents who are known to fall asleep during movies, a crime punishable by death in my view. But they didn't snooze in this one. They were both glued to the edge of their seats, eyes wide open, for the entire two hours and thirteen minutes. Tim has already filled you in on the nonfiction plot and the incredible acting job of the lead pirate Barkhad Abdi. As far as memorable villains go, Abdi is right up there with Anthony Hopkins in "Silence Of The Lambs" and Javier Bardem in "No Country For Old Men." His incredible skinniness makes you believe he's the real deal. (I agree with Tim—it's hard to believe this guy hasn't has some actual ship-robbing experience.)

Other reasons that make this film relentlessly tense are Henry Jackman's pounding score and Paul Greengrass' direction, demanding that these richly dark pirates never let up on their hysteria. Of course movies that use any type of closed-in location (ocean liners, submarines, airplanes) have a definite scare-factor advantage. I like to call them "no way out" flicks. And CAPTAIN PHILLIPS in no exception.

I'd be remiss if I didn't mention Tom Hanks. His controlled strength under duress eventually crumbles and that's when we really get to witness the range of his acting chops. If you're a nail-biter, I'd wear gloves to this one!

Posted by Timoteo at 10:27 AM 2 comments: Links to this post