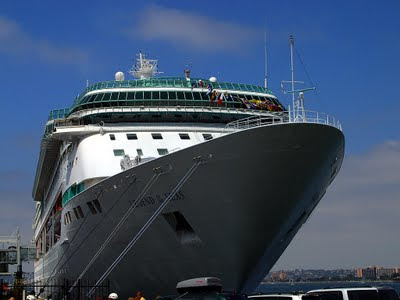 Hey, you starry-eyed... glassy-eyed...cross-eyed romantics ! The entire nine year run (1977-1986) of the smash-hit TV series The Love Boat is out on DVD, and I've just finished reliving season one!
Okay...you either love it, or you despise it, but take another look at the masthead of this blog and you'll notice that I'm an incurable romantic, so The Love Boat has always held a special place in my heart. Television's most affable cast of all time featured Gavin MacLeod as Captain Stubing; Bernie Kopell as Doc ; future congressman Fred Grandy as Gopher ; Ted Lange as Isaac the bartender; and a coked-up (by her own admission) Lauren Tewes as Julie the cruise director.
More than any other show, The Love Boat exemplified that old cliche that it's not the destination, but the journey, as each week they would set sail for some romantic locale, but the real action always occurred on board. When you find a formula that works--like Coke, (not the kind that Lauren Tewes was ingesting) you stick with it. Each episode featured three concurrent story lines--normally one that was serious, one that was cute/funny, and one romantic. The crew did no work to speak of, instead they hung out with and often got romantically involved with the passengers--which must be a serious no-no for cruise employees in the real world, but we're talking pure fantasy here.
The characters were stereotypical, and the acting was often wooden--but the dialogue was snappy and funny, and two or three big-name stars were on board for each episode, including the likes of: Milton Berle, Florence Henderson, (and her annoying screeching) Tom Hanks, Suzanne Somers, Telly Savalas, Ava Gabor, Phil Silvers, Jane Curtain, Leslie Nielsen, (in an uncharacteristic serious role) and even Anson Williams as a PRIEST--of all the ungodly things !
In the interest of full disclosure, I'd be remiss if I didn't mention the fact that one of the things that endeared The Love Boat to me was that, at least during the early episodes, many of the women on the show were sans bras--as was the fashion during the seventies--adding a "titillating" aspect that you won't find on today's network TV shows ! (And refreshingly, NO IMPLANTS.)
What REALLY made The Love Boat was the buoyant theme song, written by the great Paul Williams, and sung by Jack Jones. Some instrumental variation of the theme underscores the action throughout each episode, and it's totally invigorating--propelling us incurable romantics into a dreamy vision of a world where all things are possible.
So relive the PASSION...relive the ROMANCE...relive the PECULIAR LOOKING HAIRSTYLES... and come aboard--we're expecting you !
Posted by Timoteo at 9:25 AM 4 comments: