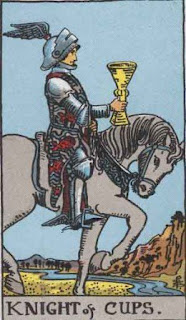 
To frame it in language that my uncle Lemuel back in Nebraska would find user friendly: Terence Malick makes weird movies that some consider to be absolutely brilliant, while others just shake their heads and say:  Shit...I'll never get  those two hours back!

Case in point: Tree Of Life.  It was lauded as a masterpiece by many and was nominated for three Academy Awards. I found it to be disjointed and tedious. However, if I were to view it a second time, I might get a better grasp on what Mr. Malick was trying to convey. The same can probably be said for his latest offering, Knight Of Cups.

The "plot" is as follows. Rick (Christian Bale) is a Hollywood writer who drifts in and out of reverie with six pivotal women in his life--played by Imogeen Poots, Cate Blanchett, Freida Pinto, Natalie Portman, Teresa Palmer, Isabel Lucas, and Brian Dennehy. WHOOPS...Dennehy plays his father...heh heh...with whom Rick has flashback encounters designed to give us an inkling of past tragedies.

The characters in Knight Of Cups speak solely through their own interior monologue--in other words, they are talking to themselves. The action moves from one dreamlike sequence to another, through the kaleidoscopic cityscapes and the "beautiful people" of L.A. and Las Vegas--to the beach, to the bedroom, to the boredom (my own).Through all of this cinematically pretty navel-gazing, Christian Bale, as Rick, is trying to figure out who he is...or what his life is all about...or maybe what he is doing in this film in the first place.

It's a lot of weirdness, Uncle Lemuel (which I'm not averse to), but after awhile it gets to be too much of the SAME KIND of weirdness--like watching Freddy Krueger come back to life every damn time they kill him, or listening to Marco Rubio up on the debate stage!

Maybe Malick is making a statement about the dreamlike nature of life. That I can grasp. You sit in your living room gazing at a chair where somebody sat weeks, or months, or years ago and you wonder...were they ever really there?

I suppose after seeing Remember, a movie I felt was one of the best I'd ever seen, it's only fitting that the next one should be – bar none -- worst movie I've ever seen! I have very little patience with stories that have no discernible story. Obviously the producers of this turkey knew what they were dealing with and decided (after seeing the final cut and tearing their hair out) to make the trailer look as if it was a triangle love story between Bale, Blanchett and Portman. That's what I thought I was going to see!

Instead I was subjected to long silences, Tarot card headings, self-indulgent soliloquies and a film that seemed to go on forever. The only people I think might get something out of this meandering mishmosh are the 420 crowd. Warning: Take a BIG toke before entering the theater...

Posted by Timoteo at 7:40 AM No comments: