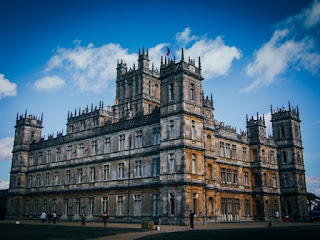 I was never a fan of the PBS miniseries, Downton Abbey (in fact I'd never seen one episode), but all the gals in the theatre for the movie version obviously were, as they were tittering all the way through this two hour tour-de-farce.

British humor is so...well...pretentious (as are most things British). It relies on a kind of haughtiness and condescending attitude when putting someone else down through the use of biting sarcasm. And here's a trivia question: What 2019 film plays out with nary a person of color anywhere to be found? Yes, it's Downton Abbey! Were it an American film set in modern times you'd never hear the end of it. But it's  somewhere in the early twentieth century as we revisit the aristocratic Crawley family and their teeming anthill staff preparing for a visit from the king and queen. This sets in motion much scrambling to get everything just right and show the royal couple the proper amount of...pretense (the British stock in trade). All the obsequious curtsying and butt kissing is humorous in an appalling sort of way (as it is in real life to this day).

The dowager countess (Maggie Smith) is at the heart of the action throughout, and she sets the proper tone of haughtiness for the rest of the cast of seemingly thousands. To delve further into the intricate plot would be beyond the scope of this review. Suffice it to say it's complicated, the characters are numerous and difficult to keep track of, and the film goes pretty well past its sell-by date. (Could have done with a lot less ballroom dancing.)

But there's a grand scene of horses and pageantry that is truly impressive. In fact, it's a wonderfully poignant comedy-drama, with John Lunn's elegant and uplifting music score primarily responsible. I'm an old romantic from way back and I eat that stuff up! And the acting is first-rate. Splendid. Bully.Top-flight.

Though I still think that British period pieces like Downton Abbey exist primarily for the purpose of keeping costume designers rolling in the chips.

I am speechless. (And for a blabbermouth like me, that's pretty impressive.) Before I comment on Downtown Abbey, I want to share the process Tim and I go through on deciding which films to review. He has a wide range of rules about what'll he see and what he won't see. My no-nos are confined to sci-fi and animation. Still, that leaves us plenty of choices. As a diehard fan of the PBS series, I pestered, cajoled and begged Tim—against his will—to see this one. He agreed with one caveat: "I get to choose the next one!" I share this with you because, as I watched this hodgepodge of a movie, I kept muttering under my breath: "Tim's gonna kill me."

I'm convinced he liked Downton Abbey because he'd never seen the original. I'm equally convinced I hated it because I had. These wonderful characters were, for me, like family. I'd lived through many a crisis with them. And to see the cardboard cutouts they became on screen? What a disappointment! (Some of the actors weren't even in the TV series – which only added to my confusion.) It felt like the screenwriter had never even seen the series. (To my horror, the screenwriter Julian Fellows created the original!)

Maggie Smith delivered the best lines, of course. But there were so many plots and subplots that keeping track of them was as challenging as preparing beef Wellington for visiting royalty.

I suppose if one views Downton Abbey as a spoof about British snobbery, it might be enjoyable. And it spares no expense on being authentic to the period. But I loved those characters and the film version robbed them of their authenticity! 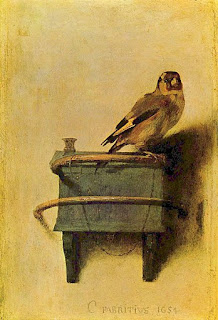 I was pretty stoked to see the film adaptation of Donna Tartt's Pulitzer Prize winning novel, The Goldfinch. I read the book--all 800 or so pages of it--and heartily concurred that it was deserving of every accolade it received. A literary masterpiece.

The scope of the novel goes far beyond the bare bones plot points I've provided. What makes it a classic is the fiery brilliance of Donna Tartt's prose, which unfortunately doesn't get translated to the silver screen--especially since she had no hand in the writing of the screenplay.

But I believe every film should stand as its own independent work of art, regardless of the source material. That's giving it a big break from the get-go. I'll just assume I haven't read the book. Now show me what you've got. The Goldfinch does a pretty good job of staying faithful to the main plot points of the novel, presented through flash backs and flash forwards a-plenty. But it's slow as the molasses in January for the first two-thirds of its two and a half hour running time. Slow and inexplicably devoid of any compelling emotional thrust to drive it forward. It seems as aimless as our young protagonist, Theo (Ansel Elgort, Oakes Fegley), as he grows into young adulthood trying to find himself. It picks up in the latter stages, as things hang in the balance and Theo must take decisive action to turn his unprincipled life around.

The incomparable Nicole Kidman, as the kindly woman who takes the young Theo in after the death of his mother, is a work of art in her own right, looking younger with each film she makes. The rest of the cast has a few names you may be familiar with (Sarah Paulson, Jeffrey Wright, Luke Wilson) and a lot that you won't. If you've read the novel and you're a ne'er-do-well with too much time on your hands, go ahead and see the film, and let me know if you concur with my assessment. If you haven't read the book, make it a clean sweep and skip this not-so-clever
forgery as well.

Like Tim, I read the book and remembered liking it a lot. However, I didn't remember most of the plot details until the movie reminded me of them. Unfortunately, I have to concur with Tim's molasses metaphor. My lids were getting heavier and heavier until our main character went to Texas to live with his classic bullshitter of a dad and met Young Boris. For me, that's when The Goldfinch came alive.

Finn Wolfhard, a still-in-high-school actor from Vancouver, Canada, is totally brilliant as the street savvy Russian kid whose violent childhood has made him a crafty but charming survivor. That actor deserves an Oscar nod, for sure.

I liked the fact that the cast was full of unknowns. It made the movie seem less Hollywoodish. The Young Theo was ably played by Oakes Fegley, who has only one screen credit. He played Pete in the remake of Disney's Pete's Dragon. (By the way, I used to be married to one of the composers of the musical version of that same film, Joel Hirschhorn.)

And another unknown-to-me actor, Ansel Elgort, played the Adult Theo with equal believability. Problem here is, the movie made his character seem emotionally frozen. It works in the book. In the film, it gets a bit monotonous.

I loved the visual contrasts. From a cluttered antique store, to a deserted Texas housing development, to Broadway in all its nighttime glory. The director took his time—probably too much—shooting scenes that looked themselves like art pieces. I wish I hadn't read the book. I would've enjoyed the movie more.

Not to parrot my last review, but if you decide to see The Goldfinch, please stay for the credits. You will, for very different reasons than Young Theo, fall in love with Carel Fabritius' masterpiece.

Posted by Timoteo at 3:47 PM No comments: