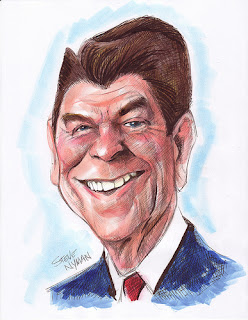 
We open in 1982, and Elena McMahon (Anne Hathaway), a reporter for the Atlantic Post, and her colleague Alma (Rosie Perez) are in El Salvador during that country's civil war--doing what journalists often do. Poking their noses into dangerous situations for the sake of getting a story,

Later, McMahon gets reassigned to cover Ronald Reagan's 1984 reelection bid (funny...it's still 1984) and she's not happy. She cuts out on the campaign to be with her ailing and addled father, Dick (Willem Dafoe). Dick McMahon is involved in some illegal arms dealings to Central America, and he's on the hook for a half million bucks. He needs to get a load of weapons shipped down there and collect his payment. But he can't handle it himself. So he asks his daughter to fly down and facilitate the operation. By doing so, she's placing herself in a highly volatile and unpredictable situation.

At what point would a normal person say, "No dad...that's crazy!" Apply a little tough love. But she agrees to do it, because as it eventually hit me...she's an adrenaline freak! (Despite the appearance that she's just a dedicated journalist ready to go where the action is.) Adrenalin junkies always need more, until one day...poof!--they've checked out of this world way too early.

A little history refresher might be in order. In 1979, the left-wing Sandinistas overthrew the dictator in Nicaragua. Ronald Reagan was afraid it might trigger revolution throughout the region, and threaten U.S. security. The U.S. secretly funded the right-wing contras, who were fighting to overthrow the Sandinistas, even though such activity had been outlawed by congress. Much of the funding had come from Nicaragua's cocaine trade. Reagan continued to support the contras on the sly, and the resulting scandal threatened to take down his presidency.

It is against this backdrop that the delusional Elena thinks she'll just go down there and complete her father's transaction, like an everyday trip to the bank.

Elena has pieced things together, and she wants to blow the lid off the whole she-bang. Ben Affleck is a high ranking government official who's trying to keep her from learning too much, which necessitates getting her into bed to gain her trust. (She's so sympatico!) She'll try to pump him for whatever information she can get. As she says, "I came for the money, I stay for the scoop."

The Last Thing He Wanted, adapted from Joan Didion's last novel, seems torn between wanting to be a personal or a political story. The political is settled history. We've been there, done that. It should provide a context to move Elena's story along, but not be constantly distracting us from it. We want to develop some empathy with Elena, but it's difficult when there are so many shadowy players to  keep track of. Whose side are each of them on? It keeps you guessing for sure, but it's like a crossword puzzle you will never finish because you've only figured out some of the answers.

The movie's strong points are its cinematography; its authentic sense of time and place; and the ratcheting up of tension with escalating dramatic music. And the heavyweights who play the heavies. Hathaway is in constant woman-running-from-bad-shit mode, but she looks good all sweaty and stuff. And a more mature Rosie Perez sans makeup is quite appealing as well.

There's a twisty and twisted surprise ending. But how kind can you be to a film that will do any appalling thing for shock value? (When the dog appears, look away.)

Thank god for Tim! Reading his review explained what this blankety-blank-blank movie was all about. I didn't have a clue. I kept muttering to my cat, "Is Ben Affleck a bad guy or a good guy? Is Willem DaFoe's character dead now or still alive? Did that actor who played the gay bon vivant also play Truman Capote?"(Toby Jones) But the question I kept on repeating to my furry friend was "When will this turkey ever end???!!

I've often wondered whether Netflix accepts films that the producers know will bomb in regular movie theaters. It would appear so if The Last Thing He Wanted is any example. Speaking of which, who is the "he" in that mysterious title? (Maybe it was a typo and they meant to call it The Last Thing She Wanted?)

If you have a secret desire to see Ann Hathaway's breast – at least one of them—then turn on this baffling and battle-weary film. My advice? Read the book instead. (Joan Didion had to have done a better job with the story-telling than African American female director Dee Rees.)