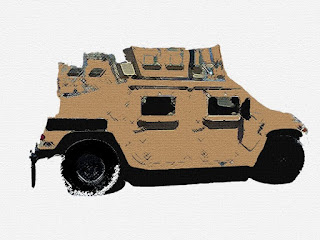 What do you do when you are bored with your desk job as a TV news editor?  Aw, hell--sign on as a war correspondent in Afghanistan and risk getting your ass in a sling, but at least it will get you some face time on the network! This appears to be the cavalier manner in which Kim Barker (Tina Fey) went about choosing her life path in Whiskey Tango Foxtrot (set circa 2006)--the film based upon the real Kim Barker's memoir, The Taliban Shuffle. Hopefully, there's more that went into that decision than what appears onscreen in the film, though Ms. Barker has stated that she wanted to do something that would challenge her and push her out of her comfort zone.

When people face the real possibility of imminent death, they live like there's no tomorrow. They have wild parties. They have sex. They become addicted to the adrenaline rush of living in the moment. Kim gets hip to this early on when her drop-dead gorgeous (pardon the pun) colleague, Tanya (Margot Robbie), casually inquires if it's okay to boink Kim's security guys. It's one of the cackle-out-loud moments of the film, of which there are several.

Kim goes out on a mission with the troops. They are ambushed by those pesky Taliban. Bullets are flying and striking their Humvee. She scrambles out of the vehicle to film the action. She wins the thumbs-up daddy approval of General Hollanek (Billy Bob Thornton). At first, all of this seems pointless, like the endless conflict of will and ideologies they find themselves embroiled in, and there seems to be no discernible plot. But one does develop. It's the slowly simmering romance between Kim and the Aussie photographer, Iain (Martin Freeman). He's a lecher and she knows it. In time, though (again, since they may not have much of it)  she finds him irresistible. The poignant moments occur when they are together--ruminating about what comes next, and does it include some kind of future together? Who knows, but in the meantime, let's hop back into bed!

Whisky Tango Foxtrot walks that serio-comic line-- the dark humor, juxtaposed against the romance (in both the larger and smaller sense of the word) of war, and does it pretty seamlessly. Of particular note in accomplishing this is the choice of songs, such as Harry Nilsson's lugubrious, sweetly sticky "Without You" playing during an action sequence. It's quirky, but it works. Which pretty well sums up the film as well.   .

Lugubrious. I love that word! It sounds so sad and dismal. Which is anything but how I would describe Whiskey Tango Foxtrot. Sure it has its moments of hilarity, but Tina Fey has  serious acting chops. And the movie makes some excellent  points about the effects of war. I could be glib and call it "an updated version of M.A.S.H. in Afghanistan." But Whiskey Tango Foxtrot offers far more to think about (while I was watching it, anyway). How ambition often triumphs over friendship. How the threat of imminent death can redefine one's moral code. How sex, drugs and rock and roll is, was, and always will be a great coping mechanism. (I knew that one already!)

That being said, the movie—like most skits on SNL—is quickly forgettable. (Maybe that's producer Lorne Michael's influence?) Fun, yes. Entertaining, for sure. But minutes after I left the theater, the only thing that stayed with me was Martin Freeman's performance as war photographer Iain Mac Kelpie. I'm not a devotee of The Hobbit flicks so I was unfamilar with this talented Brit. But he played the role of a scoundrel-in-training and was still able to earn my emotional support and sympathy. Kudos to you, Martin!
Whiskey Tango Foxtrot (love those initials!) is definitely worth seeing. I just wish the film had lingered longer in my affections.