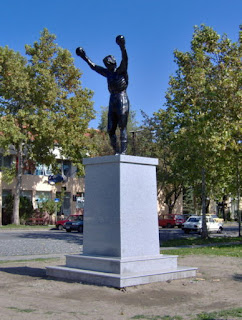 Creed might have aptly been named Rocky 17 (or whatever number fits in there). It follows the tried and true Rocky formula from start to finish. And since Rocky was number five on my Top 100 Favorite Films of All Time list, that's absolutely fine with me. (I"m going to use "absolutely" a lot in this review-- as, if you remember, it's one of the champ's favorite words.)

Sylvester Stallone was born to play Rocky Balboa. He IS Rocky Balboa. And this current incarnation of the ultimate underdog who inspired an entire generation has been rewarded with a Golden Globe nomination for Best Supporting Actor. I absolutely concur.

Apollo Creed, the flashy heavyweight champ whose epic duels with Balboa were a cornerstone of the first two films in this franchise, is no longer with us. But his son, Adonis (Michael B. Jordan), is a chip off the ol' block. A born fighter. From an early age, he gets into scrapes and plenty of trouble. Eventually, he's taken in by Apollo's widow, Mary Anne ( Phylicia Rashad). She raises him right. He has a good job in the business world. But a leopard can't change its spots. Donny wants to be a boxer. He secretively piles up some victories over a series of tomato can fighters in Tijuana. He feels he's ready to follow in his dad's footsteps. He quits his job (to Mary Anne's chagrin) and looks for someone to train him. Lo and behold, he finds Rocky, living a quiet life as the proprietor of Adrian's Restaurant. It takes some doing, but Donny convinces the retired ex-champ to take him on as a project. I shouldn't have to tell you the rest. Together, they will take on the world.

To illustrate my next point, I'm going to insert an excerpt from my review of the original Rocky:  Bill Conti's music score MADE these films--and inspired a generation to tell their crummy bosses to shove it and go out and do...well, I don't know, and neither did they. They were just INSPIRED, dude!

Following in Conti's footsteps for Creed is Swedish composer Ludwig Goransson, who does the master proud with his stirring, fist-pumping score.

There are just enough new twists on the familiar theme to make Creed feel fresh and up to date. Donny jogs through the streets, but instead of a big crowd of supporters fanning out behind him on foot, he's accompanied by a cadre of bikers showing off their riding acrobatics, as that exhilarating music kicks the scene into high gear.  It works.

Tessa Thompson, as Bianca, is Donny's love interest--the new Adrian, as it were. But unlike Talia Shire's introverted character in Rocky, she's a singer. She's eye candy, but she's got some fire to her as well.

Does a timeless story ever get old?  Methinks not. That's why, from stage to screen, Romeo and Juliet has been reworked and retold so many times.

It's the same thing here. Absolutely.

Methinks Tim is perhaps punch drunk. Or such a Rocky fan that the franchise and it's creator can do no wrong. It's not like I didn't dig Rocky, Rocky II and Rocky III. (After that, I got tired.) But seriously, folks. Creed is entertaining – for awhile. But the boxing sequences are really drawn out and the on-and-off romance between the boxer and his corn-rowed neighbor doesn't compare to Rocky and Adrian's love story. I will give Sylvester Stallone points for his acting chops. But is it award-worthy? Let's not go overboard.

I wouldn't want to give away too much of the story line, but I did like the motivation the scriptwriters (director Ryan Coogler for both screenplay and story, Aaron Covington and Sylvester Stallone for 'character') gave Rocky for continuing to coach his protégé against all odds—including his own.

In general, I'm not big on sequels. They rely too heavily on fans whose loyalty spells 'big box office' no matter how repetitive the story is. Creed may have a different title and age may have slowed Rocky Balboa down a bit. But I suppose if you are a fan of fight movies, this one is worth seeing. Then again, you might be better off renting Raging Bull.