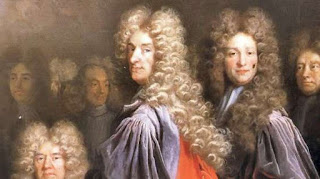 It's the early 18th century. England's Queen Anne, in declining health--mentally and physically--reigns during the time of the War of the Spanish Succession. Against this backdrop, we have the story of three women: The queen (Olivia Colman), her close friend and confidante Lady Sarah Churchill (Rachel Weisz), and Abigail Masham (Emma Stone), Sarah's cousin who has fallen on hard times and is looking to land a gig as a nanny or a maid at the palace.

Sarah starts out as the queen's favourite (I'll stick with the British spelling!) She calls a lot of the shots for the ailing monarch (think Dick Cheney in the Bush White House). But Abigail isn't the sweet thing she comes off as in the beginning. Her ambition is to take over Sarah's position as teacher's pet, and that involves servicing the queen in every way you can imagine.

Thus begins the subtle skulduggery and behind the scenes machinations as the two women try to undermine and discredit one another, and they will stop at nothing. The wigged-out (pardon the pun) men of the royal court, who pop up here and there, ineffectively attempting to advise the capriciously cranky queen on affairs of state, are essentially props here as the gals take center stage.

The Favourite could alternately be entitled Lifestyles Of The Rich And The Severely Overdressed. It does nothing to disprove my theory that British period dramas exist primarily to keep costume designers from starving. But don't let the era and all the pretentious get-ups fool you into thinking this is some kind of stuffy historical drama. It's a bawdy and strangely savage movie. The women have ducks thrown into the air and then they shoot them,   just for target practice. Not in one but in multiple scenes. In another scene a pet rabbit is nearly crushed underfoot, deliberately, by one of the petulant primary characters. (What's the point? To reinforce in our minds that these women are cold-hearted and essentially dead inside? We don't need to be hit over the head with the obvious). There are multiple instances of people puking. Boobs, butts, and bitchery. This is what gets nominated for Best Picture at The Oscars in 2019.

And though The Favourite is set in the 1700s, it effectively gets its contemporary feminist slant of strong women and subservient men across. That's the ticket these days.

This too shall pass.

Are commendable performances from Colman, Weisz and Stone, along with some gorgeous cinematography enough on their own to make The Favourite a great film? I think not, old chap.

JILL'S TAKE
The best thing about The Favourite are the myriad bunny rabbits hopping about, pooping on every lavish carpet in the Queen's chambers. I kept pitying the film crew having to clean up after them. Yes the sets were breath-takingly opulent and, yes, the women were bona fide bitches. But "Downtown Abbey" it ain't. (I happened to love that series!)
I can't understand why this piece of British history (did the Queen really keep pet rabbits?) has garnered such favor with The Academy. Then, again, I disagree with all the nominations Roma has received, too. It felt painfully long and drawn out. And the woo-woo rabbit-ridden ending left me cold.

Since all three female actresses have been nominated, I guess I'll have to credit them with good performances. Especially Olivia Colman who played the demanding and demented queen to screechy perfection. But who needs to be yelled at for one hour and fifty-nine minutes? Not me.
Grade: D -

Posted by Timoteo at 9:37 AM No comments: