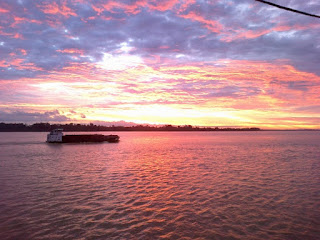 
The reasons why people behave as they do aren't going to be obvious to most of us unless we know their back story. But initially all we know about Lee Chandler (Casey Affleck) in Manchester By The Sea is that he's a blue collar guy--employed as a janitor and handyman in the Boston area--who has two speeds: sullen and uncommunicative, or volatile and on the verge of exploding at the slightest provocation.  He gets into disputes with the tenants in the building where he works. He gets into bar fights. He's not the sympathetic character most are going to identify with.

But then, through a series of flashbacks, we begin to learn what makes Lee, the time bomb, tick. It's rooted in personal tragedy and loss. His heart is broken. And so we begin to comprehend, and we soften to him. The story question is: will the man himself ever soften? Will we see the traditional arc of personal growth and conquering one's demons in the end?

Being haunted by the past is one thing, but then Lee's brother, Joe (Kyle Chandler), passes away, and in his will he has assigned custody of his teenage son, Patrick (Lucas Hedges), to Lee, who is ill-prepared for and resistant to the idea of taking on that level of responsibility.  But as it turns out, there is no one else remotely suitable.

The relationship that develops between Lee and his nephew--who is something of a ladies man at age sixteen--and just as hard-headed in his own way as his uncle, is stormy at times, darkly humorous at others. Patrick wants his uncle to move to Manchester, where he has his school hockey team and his girlfriends. Lee is stubbornly resistant and wants to move Patrick to Quincy with him, not wishing to return to the scene of painful memories.

The acting in Manchester By The Sea is superb, and Affleck is likely in line for an Oscar nomination. And I've been an ongoing fan of Michelle Williams, who plays Lee's ex-wife as a"tough broad" in the flashbacks to her life together with him, and then as the broken woman she has become in an aching scene where the two of them meet again after all that sea water has passed under the bridge. Some hurts you live with forever.

It's not a film for everyone. It's two and a half hours long and slow paced. And the ending will take you unawares and likely expecting more--and make you gasp, perhaps, as the audience did audibly in the showing I attended.  But Manchester By The Sea is a film of subtlety. Subtle movement. Subtle changes, not marked ones. Much more like real life than the way life is normally portrayed in the movies. For some, that might be hard to live with.

JILL'S TAKE
For those who know me, subtle I'm not! And Manchester By The Sea is, by anyone's standards, beyond subtle. The subject matter is not easy to make simple. Grief never is. And without giving away too much, the event that turns our once-loving character into an emotional stone would be difficult for anyone to get over. Casey Affleck—in my view a far better actor than his brother—turns in another stellar performance. For me, he has the same vulnerable qualities as a James Dean or Montgomery Clift. (Oophs, I'm dating myself.)
Being originally from New England and quite familiar with Boston and its environs, I give high marks to director-writer Kenneth Lonergan for his visuals of that area. The bay's bleakness, the unending snowfall, the row houses, cluttered interiors. They add to the film's claustrophobic darkness.
Okay. I've praised this Oscar-contender enough. Now let me tell you what I really think. The musical score was overdone and intrusive. The suddenness of the ending left me feeling both confused and resentful. The length of the film tested my patience.  Worst of all, the character arc—if there even was one—was way...too...subtle.