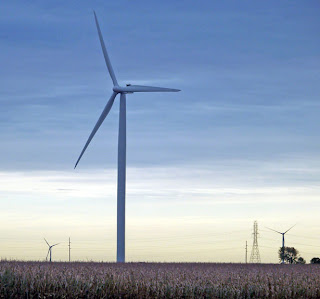 In At Any Price, Henry Whipple (Dennis Quaid) is a glad-handing, stab you in the back kind of guy--not exactly what comes to mind when you hear the word "farmer." Henry inherited a family farm that at one time was a neighborly kind of operation--I know because I spent many of my formative years on an Iowa farm, like Henry. So what made him this way?  Big business, which has extended its money-grubbing reach and turned farming into a cut-throat enterprise, as the mantra "get big or die" echoes o'er the land.  At least that is the case for those like Henry, a salesman for the Liberty Company and its genetically modified corn seeds. Henry competes with other salesmen to carve out his territory by being the most successful sales rep in a multi-county area.

The Liberty Seed Company--as anyone who has a mild awareness of what's going on in the agribusiness these days will recognize--is a stand-in for Monsanto. If you don't know the whole Monsanto story and the way in which genetically modified seeds have been foisted upon the farming community, you need to see a revealing documentary called "Food, Inc." which will get you up to speed.

Henry would like to see his son, Dean, (Zach Efron) join him in the business, but Dean has dreams of becoming a NASCAR race driver, as he routinely picks up trophies for winning races at the local track. But is Dean a born racer, or are his aspirations born more out of a disgust for his father's lack of integrity?  We will find out, so don your helmet and strap yourself in.

Henry's family is fractured in other ways as well. He has another son who is off climbing mountains in South America and doesn't want to come back. His wife, Irene, (Kim Dickens) tells him she loves him, but that he makes her feel like a fool for it everyday. Mix in his mistress, the alluring Meredith, (Heather Graham) stir that pot, and you've some toil and trouble a brewin.' .

Throughout At Any Price we see those monolithic windmills towering above the cornfields. But they're different from the old style windmills we had when I was a kid--sleeker looking---and the way in which director Ramin Bahrani keeps returning to them is highly symbolic of the prevailing winds that now blow over these vast fields of green---an ill wind that blows no good.

Despite it all, we'd like  to see Henry's family come together in the end--but the way in which that is accomplished is the dark and sinister part of this film. Is this a marriage of convenience--as in three conspirators who need each other to keep their stories straight to cover for some serious misdeeds--or have they finally grown to appreciate each other for who they are? At any rate, you will leave the theater in a reflective mood.

At Any Price features good performances from Quaid and Efron, though Quaid's Henry--with that cemented on ear to ear grin-- may be a bit more of a caricature than I  am willing to totally buy into.

If I shared what I felt was the major flaw in AT ANY PRICE, I'd ruin it for you. And if there's one thing that really pisses me off it's reading a review that reveals too much about a movie. Suffice it to say that I didn't buy the idea that all three "conspirators" would be able to pull off the conspiracy. (That didn't give away anything, did it?)

Dennis Quaid's character adds new dimensions to the word "smarmy." And his devoted wife has definitely never read an issue of "Cosmo." But the actor who impressed me the most was Zach Efron (whose last name means "lark" in Hebrew). From Farley Granger to Tab Hunter, Hollywood has always had its quota of pretty boy actors. And before I saw this 25-year-old golden boy in AT ANY PRICE, I would've put him in that same category. But despite his perfect face and well plucked eyebrows, Zach Efron has acting chops. And the role of Dean Whipple gives him plenty of opportunities to use them.

Since Tim forgot to mention it—but I know he agrees with me—the score by Dickon Hinchliffe was excellent. Too often people take the background music for granted. But it is "instrumental" (pardon the pun) in creating a mood. As was a wonderful scene in this movie where bleachers full of corn-fed spectators at a local drag race sing The National Athem a cappella. What a marvelous way to cement those folksy faces in our minds. Americana at its best – and worst. When I went to see this flick, I wasn't expecting to like it. But by the time I left the theater, I couldn't stop talking about the many underlying themes.

Posted by Timoteo at 4:51 PM No comments: