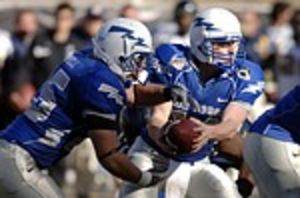 I generally don't watch sports movies--not because I'm not a fan, but because fake, recreated sports scenes don't cut it for me like the real live action does. In Draft Day, there aren't a lot of fake sports plays, but there are a lot of stock, cardboard cut-out characters.

There's the intrepid general manager of the Cleveland Browns  (Kevin Costner) who is going to wheel and deal his way through the maze--flying by the seat of his pants and going against conventional wisdom to get the best draft picks, rescue his bottom-feeding team, and make him a hero on draft day.

The coach (Dennis Leary) who naturally doesn't agree with the GM's methods, cuz you gotta have conflict.

The team owner (Frank Langella), who may be one wrong move away from cleaning house, which makes the chances the GM is taking all the more precarious to his future.

And, of course, the love interest (Jennifer Garner), who works for the team and knows more about football than most of the guys. (Hollywood loves to patronize women in this manner.) She and the GM have a thing going, and now she's going to drop a little bundle of joy upon him. But all he wants to do is make it through draft day, dammit.  WILL EVERYBODY JUST QUIT DISTRACTING ME?.


The most annoying thing about Draft Day is that it violates that old saw of good storytelling: show, don't tell. The characters are always explaining stuff to each other that they obviously should already know. It's a device to fill in background information for the audience, but it's just too obvious and awkwardly done here.

Director Ivan Reitman does a good job of  ratcheting up the dramatic tension and building momentum toward the feel-good climax. That's the strong point of the film. Along with the pulsating score from John Debney.

Legendary football coach Vince Lombardi was obsessed. Winning isn't everything...it's the only thing. He set the tone for the modern day emphasis on winning at all costs. It's an unhealthy mindset.  Because giving it all you've got and falling short is nothing to be ashamed of. It builds character. But that's not what modern day sports is about, and Draft Day--if nothing else--drives that point home.

If Tim hadn't been sitting next to me, answering my questions about how players get drafted and team managers trade picks, I would've been totally lost. As it is, I was totally bored. To borrow one of my favorite quotes by Dorothy Parker (originally describing Katharine Hepburn's acting), Kevin Costner's acting "runs the gamut of emotions from A to B." Unlike the highly volatile Vince Lombardi, Costner plays it cool under pressure. A good foil for Dennis Leary's overdone pugnaciousness. But it's all so ho-hum. And the secondary plots, i.e. his secret girlfriend, his inability to commit, his bossy mom are...well....not exactly original.

Just for the hell of it, I typed in "Top Sports Movies." Opinions abound. According to an ESPN poll, #1 is BULL DURHAM. (Costner was much better in that one.) Another link breaks it down into individual sports. According to http://www.best-sports-movies.com/football.html their pick (and mine, as well) is BRIAN'S SONG. And the New York Times poll gives ROCKY the number one slot. What these sports movies all have that DRAFT DAY doesn't is character development—and real characters to develop!

With these mini-reviews, I always try to point out something positive. This time—because I can't come up with one—I'll end with another favorite quote meant to leave you smiling: "The reason women don't play football is because eleven of them would never wear the same outfit in public." - Phyllis Diller