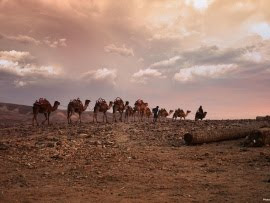 Stars: Sarah Jessica Parker, Kim Cattrall, Kristin Davis, Cynthia Nixon, Chris Noth
Director: Michael Patrick King
There are movies, and then there are your highly anticipated movies, like Sex And The City 2.
Highly anticipated, at least, among that segment of the population that regards shoe shopping as a religious experience. And there I was, knowing full well that I was marching straight into the den of CHICK FLICK-DOM, but willing to make that sacrifice just to bring you this review!
And it weren't an unpleasant ride at all.
New Yorkers Carrie, (Sarah Jessica Parker) Samantha, (Kim Cattrall) Charlotte, (Kristin Davis) and Miranda (Cynthia Nixon) are back to demonstrate that friendship lasts through thick and thin, ( mostly thick for them) one for all and all for one--I am woman hear me roar! They're all married now, except for Samantha, who always was and always will be the skanky (but well-dressed) sexual spark plug that drives the action forward.
Through her "connections," Samantha wangles an all expense paid trip to Abu Dhabi for the four of them. This comes just in time for Carrie, who's afraid her marriage with Mister Big (Chris Noth) may be losing its "sparkle," and she could use some time to ruminate on it--and for Charlotte, who's about to go off the deep end under the stress and strain of motherhood.
Upon arrival, it's the four liberated material girls from America in a culture clash with repressive middle-eastern mores. True to form, Samantha flaunts her sexuality, as if she can't be bothered to remember she's in a region where public displays of affection are a big no-no, and gets busted for getting too amorous with a dude on the beach. All this "cramping her style" leads to Samantha eventually throwing it back in their faces with an irreverent, wickedly hilarious display of public vulgarity and impudence not witnessed since Marlon Brando dropped his pants in the dance hall scene near the end of Last Tango In Paris.
Subplots involve Carrie running into an old flame in an Abu Dhabi marketplace--tempting fate and her loyalty to Mr. Big--and Charlotte obsessing over hubby being left alone with the kids and their big-busted nanny. Miranda seems pretty much along for the ride in this one--unfortunate, because the only thing I seem to remember from the first film was her torrid lovemaking scene and how (surprisingly) hot her body still was!
GUY ALERT! GUY ALERT! Maybe it's due to the limitations of a plot where everybody but Samantha is in a relationship, so they're not going to be fooling around much--or maybe it's because in real life our four gals are just slightly past their "sell by" dates, (to varying degrees) and shedding their duds might be less titillating than embarrassing, but Sex And The City 2 is surprisingly stingy in the skin department. Even Samantha's obligatory bedroom romps are uncharacteristically unrevealing. There is, however, a nice wet T-shirt shot of the aforementioned nanny to lift your spirits some. Not as disappointing for the girls, though, with a bevy of hunky shirtless dudes, a bare bottom, etc. (I never seem to notice how gratuitous the nudity in most movies is when it's the ladies who are flaunting it!)
A lavish gay wedding at the beginning of the film--replete with Liza Minelli presiding (who now looks like a Saturday Night Live caricature of herself--or maybe her mother) was romantic, musically captivating, and just quirky enough to hook me in for the duration.
So all in all, I found Sex And The City 2 to be kind of a hoot.
GRADE : B
Posted by Timoteo at 8:16 PM 4 comments: Links to this post

Starring: Cillian Murphy, Ellen Page, Susan Sarandon, Bill Pullman
Director: Michael Lander
Peacock is a straight to DVD release (April 20, 2010) that, remarkably, features some big names in the cast. Irish actor Cillian Murphy shines in the dual role of John and Emma Skillpa--a cross-dressing split personality whose masculine side works as a bank clerk, while his wig clad feminine alter-ego takes on the persona of John's homebody wife. All seems to be going smoothly until a train caboose ends up in John's backyard and threatens to derail his neat little double life when the townspeople of Peacock, Nebraska discover Emma and start to get curious.
Maggie, (Ellen Page) a young single mother on the skids, figures mysteriously into John's past, and holds the key to his weirdness. Like any good psychological drama, the clues are dispersed in increments as the film goes along.
Set in the 1950s, Peacock is a character study tour-de-force, with Murphy alternating between the painfully shy bank clerk persona of John, and the more complex Emma, who is plotting against him to have things ultimately go her way. (And he's awfully pretty as a woman!) It's a Norman Bates-esque performance--and true to form--Emma's increasingly diabolical mindset will lead to some skulduggery before it's all said and done. (As one who grew up in the midwest, the image of a bank standing next to some big grain silos strikes a familiar and an authentic chord. )
Cillian Murphy is so much the standout in this film that it makes you wonder why someone like Susan Sarandon--who plays Fanny Crill, the town mayor's wife--was willing to take on a secondary role that doesn't challenge her in the least. The same with Bill Pullman, who plays John's pain-in-the-ass supervisor at the bank. Ellen Page, as Maggie, is the only other character that is fleshed-out to any degree.
I must put in a word for cross-dressers here, who by and large seem to be a harmless lot--but movies like Alfred Hitchcock's Psycho, and Peacock, may have given them a bum rap.
RIGHT, DAD?
There aren't any trick endings here--we can pretty much see what's coming as a logical progression of the power struggle between two personalities inhabiting the same body--but I found Peacock growing on me, haunting me if you will, in the days immediately after I saw it...reflecting on the old adage that the child is father to the man.
GRADE: B
Posted by Timoteo at 12:55 PM 7 comments: Links to this post