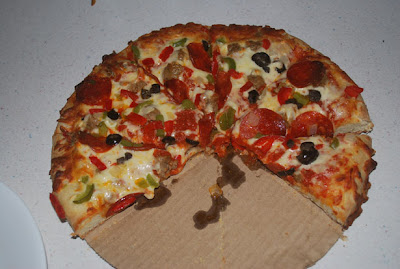 
Bored with her marriage to Steve, (Billy Crudup) Liz files for divorce and takes up with a young actor (James Franco) who whets her appetite for spirituality--unwittingly sewing the seeds of his own demise with the flighty wordsmith--who seems to burn out quickly on guys who really care for her.
So she's off to Italy, where she'll engage in philosophical discourse with her new acquaintances while stuffing her face a lot; then to India where she hangs out in an ashram, looking like she's always feeling slightly out of her depth; and finally to Bali, to soak up wisdom from a toothless medicine man and get involved with a Brazilian dude--another nebulous relationship--because she's never quite sure about anything.

And now to my biggest pet-peeve about films that are adapted from nonfiction: The central character is always played by someone who is noticeably better looking than the real person. (Unless it's like, Ernest Borgnine.) So that is the first thing that gets fictionalized when a nonfiction book hits the silver screen. Liz Gilbert is a reasonably attractive woman, but she's no Julia Roberts. However, when I read the book some years back, I got the distinct impression that the author thought of herself as being this super hot chick, so she must have figured the selection of Ms. Roberts to play her was spot on.

Richard Jenkins' performance as the down-home Texas dude who befriends Liz at the ashram in India, dispensing nuggets of wisdom as he deals with the spectre of his own past, is already being touted as Oscar worthy, and I agree. And Javier Bardem as Felipe, Gilbert's love interest in the latter part of the film, is an affable presence, and sure-fire swoon material for this chik-flick's primary audience--though I think that Eat, Pray, Love does have broader appeal than that--if for no other reason than there's been a ton of hype about it, and guys will inevitably get dragged into the theatre at the behest of their girlfriends and spouses.

Now, how shall I describe the soundtrack? Well, it's one of the most curious, surprising, delightful, and baffling amalgamations of sound accompanying a major film in recent memory. From breezy samba rhythms, to Sly and the Family Stone, Kool and the Gang, Neil Young, and something that nearly made me fall out of my seat...a piece lifted right from Gato Barbieri's exquisite soundtrack from Last Tango In Paris. Never have I seen such a blatant recycling of something so wholly identifiable--for all time--with one particular movie, and a classic at that. I was delighted, (to hear it) yet cringing at the same time, as the melody that originally accompanied graceful tango dancers gliding across the floor was now being set to the image of Julia Roberts stuffing her face with pizza! BALLSY--I'll give them credit for that.

There's gorgeous cinematography--which you might expect considering the locales they had to work with--but Eat, Pray, Love suffers from some choppy editing. Had some of those scenic shots been held just a second or two longer, it would have given the film more of a seamless feel. As it is, it looks like the editor was rushing to finish. (The movie runs about two and a half hours.)
'
Non-fiction brought to the screen often feels rather plotless--we're so conditioned to those traditional story arcs--but there is growth and transformation here, so if you've got the time and the bucks to spend a year galavanting about the globe, you too may gain some insight into who you are. But unless you can write a blockbuster bestseller about your experiences, that may be a jobless schmuck who is flat broke.

Now playing at home: THE GIRL WITH THE DRAGON TATTOO (Rated R)

Stars: Michael Nyqvist, Noomi Rapace, Sven-Bertil Taube
Director: Niels Arden Oplev
Genre: Mystery/Suspense Drama
(In Swedish with English subtitles)
Two strange bedfellows--middle-aged journalist Mikael Blomkvist, (Michael Nyqvist) and a young computer hacker, Lisbeth Salander (Noomi Rapace) --team up to solve a forty year old mystery: The disappearance of a teenage girl, presumed murdered, from a gathering of greedy, self-serving family members, each of them now under suspicion. Adapted from the late Stieg Larsson's blockbuster novel, The Girl With The Dragon Tattoo is a twisting and twisted tale of intrigue and suspense.
Blomkvist is hired by Henrik Vanger, (Sven-Bertil Taube) of the aforementioned clan, to delve into the disappearance of his neice, Harriet, which has haunted him lo these many years. Salander is drawn to Blomkvist by his well publicized (but questionable) conviction for libel. Lisbeth is 24--a pierced, tattooed, black leather clad, sulking enigma who works as a researcher for a private security firm.
We do know that Lisbeth's dark past includes confinement to a mental institution. She's now on probation for an unspecified crime that will be revealed near the end of the film. She isn't crazy about men, and if anything could serve to reinforce that particular prejudice, it's her probation officer--a brutal rapist who is the embodiment of institutional subjugation and cruelty the world over.
But then there is Blomkvist, and how interesting would a pair of coed sleuths be if they didn't develop the hots for each other? We follow their collaboration with fascination, as they navigate a maze of clues, red herrings, dead ends, mysterious Nazi connections, a serial killer on the loose, staring death in the face--and, of course, making some hot monkey love along the way!
The Girl With The Dragon Tattoo is gritty, graphic, and gorgeously filmed (in its images of the Swedish countryside) . It's not for those with tender sensibilities.
And Noomi Rapace is an actress to watch. That she was willing to get "down and dirty" for this role shows me that she is dedicated to her craft and willing to do whatever it takes to bring stark realism to a scene. But as her star rises, will she be like most actresses when they make it big--unwilling to revisit some of the darker places that got them there to begin with, just because they no longer have to? Hope not!
I'm now looking forward to the sequel: The Girl Who Played With Fire. It's the next installment of Steig Larsson's "Millenium" trilogy--with Rapace and Nyqvist reprising their roles as the intrepid investigators from The Girl With The Dragon Tattoo.
GRADE: B +
Posted by Timoteo at 9:35 AM 2 comments: