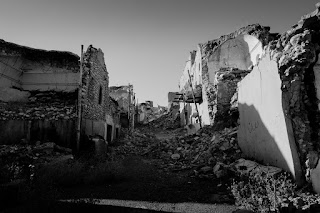 Sergio, just released on Netflix, is a biopic based on the true story of Sergio Vierra de Mello, a Brazilian diplomat for the United Nations whose long career was a series of personal and political ups and downs.

If the narrative in the film is to be believed, de Mello was an effective negotiator--a charmer who spoke straight and tough to power, but had a truly "diplomatic"way of facilitating negotiations between opposite sides, such as when he brokered a peace deal between East Timoor and Indonesia.

In 2003, he was appointed as a special U.N. envoy to Iraq, which turned out to be his last hurrah. A suicide truck bomb blast took him out. His story is told in hop, skip, and jump flashbacks, all eventually feeding into that explosive moment.

Wagner Moura, who portrays Sergio, does an admirable job of communicating the man's sensitivity and sympathy for the plight of the everyday people whose lives were impacted by the Iraq war. But his relationship with his family suffered, as evident in the scenes with his two young sons, who basically don't know him.

A love story runs parallel to the political. There is fiery chemistry between Moura and the captivating Ana de Armas, who plays fellow U.N. employee Carolina Larriera. At first she balks about him being married and having a family, but she eventually comes around and passion flares, in similar fashion to the way the film, where the camera lingers too long on some scenes, resulting in its nearly two hour run time,won me over; it's like quicksand in the way it slowly draws you in.

Sergio is told with the benefit of 20/20 hindsight, and in that way is not particularly brave or insightful in its conclusions (everyone now agrees that Iraq was a tragic misstep for the U.S.), except as a character study of one man who maintained his integrity in the face of the prevailing mob mentality ("You're either with us or against us") fostered by the Bush administration at the time. An engaging story of triumph and tragedy.

Many many years ago, when I was a teenager, I had two serious crushes on movie stars: James Dean and Montgomery Clift. Both sensitive types who portrayed weak, vulnerable men. They shaped the type of men I've always been attracted to. Or so I thought until my last serious crush on a film star. Wagner Moura was the polar opposite of weak and sensitive as Pablo Escobar in the Netflix series "Narcos." But like Dean and Clift, he sure made my heart beat faster.

So when I saw that he was the lead in the latest movie offering on Netflix, I couldn't wait to watch it. Moura still can turn on the charm (as he did playing Escobar). A good 40 pounds lighter, without a moustache, he still has incredible sex appeal. But sex appeal isn't enough to carry this choppy, deafeningly loud, interminably long film. Trying to follow the two storylines---his career versus his love affair—gave me a headache. Is it a political movie with lots of steamy love scenes? Or an extra marital affair wrapped around a lot of bombings? (I'm getting a headache again just trying to figure it out!)

I'm not big on history, ancient or recent. Maybe if I was, I would've enjoyed Sergio more. I'm really getting discouraged with the idea (I thought was brilliant at the time!) of reviewing Netflix films. Obviously, The Irishman and Marriage Story were flukes. All Netflix seems to be offering in the way of new movies these days is.....crap. Sorry, Tim. Let's wait until real movies start happening again....