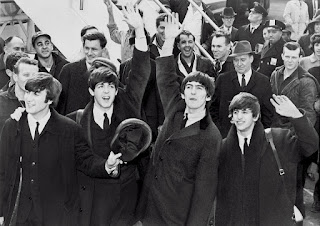 
There's not much you can criticize about a Beatles documentary (Eight Days A Week--The Touring Years) that showcases the music above everything else--directed by Ron Howard, no less! Howard and company worked some auditory magic with archival footage of live performances at clubs, concerts, and on television. The result is that you're immersed in the exhilarating feeling of being right there, live, in the front row.

And THERE THEY ARE--John and George--up there big as life...just as if they had never left us. The incongruity, of course, is that they are their forever younger selves, while present day Paul and Ringo drop by to fill us in on some of the intimate details of those touring years--1964 through 1966.

The real eye-opener--for anyone who wasn't around at the time and has only heard about the craziness second hand--is that we get the full brunt of Beatlemania. Hordes of young girls going bananas, screaming their heads off and passing out and being lugged off like sacks of potatoes by dutiful cops to the recovery station. And everywhere the Fab Four went, the crowds mobbing them as they made a mad dash for the limousine. And then there is the concert in Shea Stadium where 56,000 people were so loud that the lads couldn't hear themselves, and yet they rocked out and delivered those songs without a hitch. They were that good.

Brian Epstein, the architect and engineer of the group's rise to musical immortality, is prominently featured. Whoopi Goldberg and Elvis Costello provide some personal anecdotes. Whoopi, for one, was a huge fan. And who wasn't?

The documentary only briefly touches on the Beatles' psychedelically induced period that followed, which was beyond the scope of the film. But this was where the real "Revolution"started. Suddenly, music became a medium with a message, not just a beat. And so many of us grew up making personal transformations that paralleled the transformation in the Beatles' music. In a very real sense, they were the soundtrack to our lives.

The night I went to see Eight Days A Week at La Paloma, a funky little theater (built in 1929) in Encinitas, California, it was packed with diehard Beatle fans. Mostly baby boomers, eager to relive their youth. But even if you weren't born back then, this documentary is more than just a musical tribute to the Fab Four. It's about a cultural phenomenon.

I don't usually share personal anecdotes when adding my two cents to these movie reviews. But this story deserves re-telling: I was living in New York City when the Beatles came to town and I had a good friend, a classy lady named Jackie Rutherfurd, whose 12-year-old daughter "Moo" was dying to go see the Beatles perform at Radio City Music Hall. Jackie begged me to accompany Moo, fearing for her daughter's life. I agreed to go, thinking Jackie was being a bit over dramatic. Believe me, she wasn't. The screaming and hysteria in that auditorium was truly terrifying. I couldn't wait to get out of there. (Moo, of course, was crying like all the other little girls, totally in love with Paul.)

Which brings me to my one criticism of the film. The Beatle I had a secret crush on was George Harrison. And I felt his musical talent was not featured enough in Eight Days A Week. Granted, his songs emerged later but still – he was a lot cuter to me than the other Beatles. (Sigh.)

When the film ended, people clapped long and loud; and when they left the theater, I swear they looked a good twenty to forty years younger.


Posted by Timoteo at 4:23 PM No comments: Links to this post 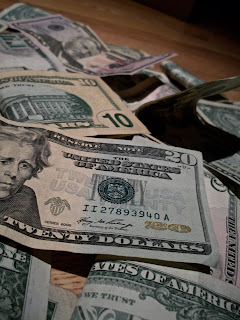 Your bank deposits are guaranteed by the FDIC. But other than Jeff Bridges, who is always on the money, I can't give you that same ironclad guarantee that you'll go crazy for the new bank heist film, Hell Or High Water.

For me, it's always worth the price of a ticket to watch "The Dude" in action, and here Bridges is a down-home boy Texas ranger on the verge of retirement--but as fate would have it, he's got one more messy situation to mop up.

That messy situation being the two brothers who are hitting up branches of the Texas Midland Bank--the same institution that happens to hold the mortgage on the family farm, and is threatening to foreclose and kick their mother out on her butt.  The brothers have a certain figure in mind, and when they reach their goal from the cash grabs they will pay off the debt and save the day. It's Robin Hood with a different twist; steal from the rich and give back to the rich.

But here is Reason No.1 for the non-guarantee: These brothers (Chris Pine and Ben Foster) are not exactly Butch Cassidy and The Sundance Kid--the hapless and affable bank robbing duo immortalized by Robert Redford and Paul Newman. It kept nagging me that Pine, as Toby, was too pretty for the role. Really, anybody as pretty as that could have easily had a career as a model, or a movie star (heh heh), and wouldn't have to resort to such desperate measures. Ben Foster, as his adrenaline junkie sibling, Tanner, is perfectly cast though. Tanner is the loose cannon, and Toby, it seems, is rather reluctantly along for the ride. But a man's gotta do what a man's gotta do, even if it is incredibly stupid. I guess we're supposed to have some empathy for these guys, as they stick it to the greedy bankers, making a statement that will resonate with a lot of folks these days. But it's too great of an end-justifies-the-means stretch.

Reason No. 2: There is no chemistry--zilch--between Jeff Bridges' Marcus, Texas Ranger, and his half-Indian partner, Alberto (Gil Birmingham). I place that on Birmingham, who could have smiled a little more...or something. Yes, there is playful banter between the two, but it falls flat.

Reason No. 3: Certain elements of the plot are telegraphed, not only verbally, but musically as well (in the soundtrack song choices). You can see it coming from a Texas mile away. It gives me no joy when I I have to sit there and grimace, waiting for what I know is going to happen to happen.

What Hell Or High Water has going for it is that there's plenty of dramatic tension--never a dull moment--as Marcus and sidekick Alberto try to outwit the brothers by anticipating where they will strike next. Hardcore action/thriller fans will probably dig it.

For someone who wasn't overly taken with this film, you were certainly generous with your rating, Tim. To begin with, I found the musical score completely in tune (pardon the pun) with the overall darkness of Hell Or High Water. At first, due to the ineptness of the bank robbing brothers, I didn't know if I was watching a comedy, dramedy, or a thriller-in-the-making. And it didn't really matter because the chemistry between these two bunglers kept me both laughing and on the edge of my seat.

As for the racial slurs Jeff Bridges kept peppering his half Indian, half Mexican partner with? I felt it worked very well, giving them a special bond – albeit a dicey one in this day and age of political correctness.

But for my money, the star of this film was Giles Nuttgens' cinematography. Those expansive shots of flat nothingness, winding roads without a tree in sight, or even a tumbleweed, set the stage perfectly. Isolation and desperation make men do terrible things. Not unlike Fargo or No Country For Old Men, this film was relentlessly tense – with just enough humor to make it watchable. Having said that, I must admit there were times—not many—when British director David Mackenzie could have picked up the pace a bit. And the ending—I won't give it away—was not very believable. Still, when Jeff Bridges is on screen, who cares!

Posted by Timoteo at 7:33 AM No comments: Links to this post