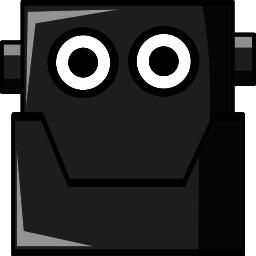 
It's the near future--so near that nothing much looks different except for the droids that now comprise a segment of the Johannesburg police force. (If this ever happens for real, it might improve the public perception of the cops...anything's worth a try). Young inventor Deon (Dev Patel), designs them.  But he's not stopping there. He wants to create the first robot with genuine artificial intelligence. He succeeds (be careful what you wish for) in the form of "Chappie," who starts out as a mental infant, but he's a really quick study and before you know it he's mastering the language and painting like that dude on TV with the big Afro.

When Chappie is kidnapped by some nasty-ass thugs who think they can use him to pull off a big heist, the plot kicks into high gear.  Deon falls into the clutches of the gangsters too, and though he gets roughed-up and threatened, he takes a stand for good parenting and implores his highly impressionable creation not to do bad things. Meanwhile, rival engineer Vincent Moore (Hugh Jackman), who works for the same weapons manufacturer as Deon, has had the funding cut for his own attack robot, Moose. He makes it his mission to take Chappie out of commission, putting himself and Moose on a collision course with Deon and his brainchild in an epic CGI battle that rivals the one in writer-director Neil Blomkamp's District 9. In both films, Blomkamp is making a point about heroism and laying it all on the line when the odds are stacked against you. And I've never seen it done in more soul-stirring fashion.

Despite all that, Chappie is played for laughs as often as not. It's cute and endearing when the gangsters teach him to pepper his speech with ghetto expletives (yes, a robot spouting the MF word is funny because it's so unexpected), and when they hang all this bling around his neck to make him one bad lookin' dude. The only thing I felt was over the top at first was Chappie's voice. Instead of your normal monotone droid voice, Chappie's takes on a human quality--first mimicking that of a scared toddler, then going through the other stages of development until he grows into an emotional adult. This made him a little too human for my willing suspension of disbelief to kick in. I mean, sooner or later he's gonna start thinking about women, and then he looks down at himself and tries to figure out just how that's gonna work... er, forget I mentioned it . But it's impossible to watch this film and not be won over by the little guy. The way we were won over by E. T.

Chappie poses thoughtful questions about the nature of consciousness--even drawing parallels with reincarnation--as a robot with a dying battery finds himself in a race against time to find a new body to inhabit.

I walked out of the theater thinking, Well... that was pretty wild!

It's more fun for the reader when Tim and I disagree. And being un-fond of futuristic, robot-infested films, I was positive we would. But I soon forgot all about Chappie's outer appearance and became totally caught up in his life-threatening adventure. When he was being beaten up by a gang of homeless hooligans, my heart went out to him. When he was torn between doing the right thing or seeking his bad-ass daddy's approval, I empathized. Just like I teared up when ET put his glowing finger on Elliot's forehead and said, "I'll...be...right...here." I don't know who deserves the most credit for making these non humans human. Is it the director? The writer? The digital miracle workers? I suppose it's a combination of all three. I was even reminded of that volleyball in Cast Away that Tom Hanks named Wilson, how real that inanimate object became!

Sure, there were holes in Chappie.(The script not his body.) Hugh Jackman's character was ill-defined and cartoonish in his need for revenge. And Deon, Chappie's nerdy inventor, seemed irrationally brave considering his line of work. But I was totally caught up in the story; how seeking approval makes even robots do the damndest things. Scriptwriters Neill Blomkamp and Terri Tatchell were spot on when it comes to showing us what a huge influence parent figures  have—be they criminals or computer geeks—on a young, untested mind.

Sorry, folks. But I'm with Tim on this one.