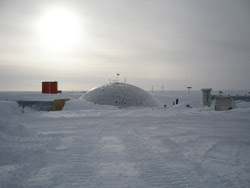 Stars: Kate Beckinsale, Tom Skerrit, Gabriel Macht, Alex O'Loughlin, Columbus Short
Director: Dominic Sena
In 1957, a Russian cargo plane crashes near the south pole because the crazy dudes on board, fueled by booze and ulterior motives, start shooting at each other. How dumb is that? That's the FIRST thing in Whiteout that stretches the bounds of believability like Kirstie Alley trying to squeeze into a size 2 spandex body suit.
Anyway, this sets the table for the current day investigation of the first murder in Antarctica, a task which falls upon the shoulders of U.S. Marshal Carrie Stetko, who is based at a south pole scientific research station. Stetko is played by Kate Beckinsale, and that's the second (and most glaring) thing in Whiteout that sticks out like a sore bum. Realistically, U.S. marshals are not going to be as young, alluring, and wispy as Ms. Beckinsale. They'd be more like the grizzled Mary Steenburgen--who plays a deputy marshal in Did You Hear About The Morgans? But I suppose Steenburgen wasn't available for this role because she was off playing that other lawperson--and besides, it would have elicited groans from the audience if Steenburgen had replaced Beckinsale in that gratuitous shower scene early in the movie. I thought Kate was terrific in Snow Angels, but here--and maybe because she KNOWS she is terribly miscast--she mails her performance in.
Anyhoo, in three days the sun will set for six months, and the base will be locked down for the duration. Stetko, who wants to get out of that God forsaken place by then, has a short window to solve the mystery. To complicate things, there's a (obviously cranky) pick-axe wielding madman on the loose. Never fear, it will all lead back to those drunken Russians who were too stupid to know that if they shot up their plane and the pilots too, it would probably go down. Frozen bodies are found, and fans of C. S. I. will enjoy it when the avuncular Dr. John Fury (Tom Skerritt) starts poking and cutting. You weirdos may dig it even more when he slices off a couple of Stetko's fingers due to severe frostbite.
Whiteout has the makings of a decent thriller--with mystery, suspense, and intriguing milieu-- and IF you can get past the egregious miscasting of Kate Beckinsale as a U.S. marshal--you may enjoy it.
But that's a big IF.
GRADE: C
Posted by Timoteo at 11:54 AM 6 comments: Links to this post