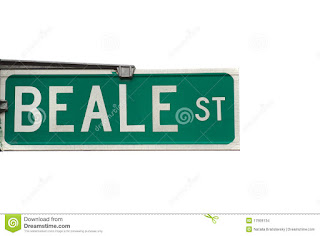 It's a rare thing when we can cite the music as being the transformative element in a film, but Nicholas Britell's exquisite and mesmerizing score is what turns If Beale Street Could Talk from what might have been just a good, hard-hitting, and poignant drama into a poetic work of art. And when we use poetic to describe a film, we're ascending into the rarefied air.

Yes, there's a love story at the heart of this film, but it's no fairy tale. Far from it. If Beale Street Could Talk--based on the 1974 novel by James Baldwin-- dramatizes the endemic injustice in America of blacks being railroaded and locked up for crimes they didn't commit.

Fonny (Stephan James) and Tish (Kiki Layne) are a young unmarried couple living in Harlem during the early seventies who are clearly in love, and seemingly have been since childhood. The opening scene of the film, which slam-bang portends its overall brilliance, is a doozy. Tish's family invites Fonny's family over to hear the announcement that Tish is going to have    Fonny's baby. Director Barry Jenkins uses the ebb and flow of circumstances and emotion effectively not only in this scene but throughout the entire film--as what starts out as a celebratory occasion suddenly turns ugly.

But love will carry this couple through, as flashbacks and flash forwards show them in their first intimate encounter (tastefully done yet quite realistic), the joy of searching for and finding their first apartment together, and finally the incident which leads to Fonny being misidentified by a rape victim and put behind bars.

How does a family with limited means work to reverse a miscarriage of justice in a climate of racism in America that has never been eradicated but just keeps morphing into new forms like a virus? That's  your central theme, and it's played out in heartbreaking fashion as we hope against hope along with Tish, who never gives up hope, and the two families, who will resort to doing whatever it takes to obtain the finances to support their effort.

Here is where Regina King as Tish's mother shines, as she tracks down the elusive rape victim and tries to get her to recant her story. It's high drama, but it never feels melodramatic. It just feels achingly real.

I'd be remiss if I didn't mention the one glaring turn off for me, and that's the incessant cigarette smoking by nearly all the central characters. It's almost as annoying watching it as it would be to be in the presence of someone blowing smoke in your face. I don't know if director Jenkins was thinking this would enhance the grittiness or the authenticity of his story--but I looked up some stats and the smoking rate among whites and blacks in the U.S. is essentially the same, at around 15 percent, so having all these prolific puffers seemed like overkill. If you want to engender sympathy for a character, don't give him dirty habits. That aside, I think If Beale Street Could Talk has a good shot at being one of the nominees for Best Picture at The Oscars in February.

(
Well, well, well. I never quite know how Tim will react to a film we choose to review. And since it is his blog, I always read his opinions before adding my own so we don't repeat ourselves. All I can say about this film is "I concur." It felt so real that I often thought I was watching a documentary. Forget about Romeo and Juliet or Ingrid Bergman and Humphrey Bogart in Casablanca, this couple's love for one another was brilliantly acted and completely believable.

It is not an easy tale to watch. The injustices of being black in America dominate If Beale Street Could Talk and force the viewer to look at how little has changed since Baldwin wrote this story.

I too loved that family scene Tim mentioned at the beginning of the film, as it showed how intolerant blacks can be toward each other. (Intolerance doesn't choose sides.)
My two gripes (very minor ones):  I was confused by the title since the story takes place in Harlem not Beale Street; and Fonny getting a life sentence for allegedly raping a Puerto Rican girl seemed like overkill.
If Stephan James and Kiki Layne, the two star-crossed lovers, don't earn Oscar nods, I'll rip up my ticket to the Academy Awards Ceremony. (Not that I actually have one!)
Grade: B++