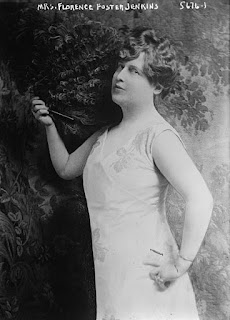 Florence Foster Jenkins was an heiress and New York socialite whose life-long love of music spurred her to become an opera singer. Only trouble was, her "singing" would make alley cats plug their ears.

In Florence Foster Jenkins, Meryl Streep takes on an enormous challenge to come off as tone deaf as the real deal. (Check out the clip of the real Ms. Jenkins at the end of this review!) I'll give Streep a B+ on that score. It's DIFFICULT to sing badly...no, it's difficult to sing badly and sincerely--with a straight face. Streep, who is actually a good singer,  gives a yeoman's effort.

Hugh Grant plays her mate, the opportunistic St. Clair Bayfield, a failed Shakespearean actor who must have seen her as his meal ticket initially--they live in a posh New York hotel--but nonetheless possesses a sincere platonic devotion to the lady. So much so that he orchestrates her singing engagements and packs the house with friends and acquaintances he knows will lend a sympathetic ear. Everyone is expected to play along with the colossal delusion, as Florence is in ill health, and he wants her to spend her remaining days pursuing her dream.(What she's suffering from I will not reveal, because it's an audience "ooh" moment, and most reviewers today GIVE TOO MUCH AWAY--one of my recurring pet peeves.)

As good as Streep and Grant are in their roles--and they are superb--Simon Helberg, as Florence's fidgety and high-strung piano accompanist, Cosme McMoon, steals the show with his comically expressive mug and mannerisms. McMoon--reluctantly at first--backs Jenkins from her initial appearances before The Verdi Club (an organization she herself founded), to her crowning achievement--a 1944 engagement to a packed house at Carnegie Hall.

Florence Foster Jenkins is also a (probably unintentional) commentary on the ability of the rich to buy their way to the immortality of lasting fame, while the masses of  mere "mortals"--many with astounding  talents and abilities--quietly labor through lives of anonymity, their brilliance ultimately recognized by no more than family and friends. But that comes as an afterthought for me, as during the movie I was rooting for Florence all the way.

And while the film is a hoot on many levels, there are moments of unexpected poignancy that may leave you misty-eyed here and there. Because what glimmers through every pore of Florence Foster Jenkins is one person's lifelong love affair with music...and as we all know, love is blind.

Not to be missed!

Damn! You stole my thunder, Tim. About the brilliance of Simon Helberg's Oscar-worthy performance? To set the record straight regarding how we write these reviews, Tim writes his impressions first and then I add my two cents afterwards. (Usually five!) I'm not in Tucson right now so we see these reviewable flicks separately. This time, my west coast film companion was quick to whisper in my ear that Simon Helberg has been wowing TV audiences for 10 Seasons in "The Big Bang Theory." What an expressive face!

Knowing the premise of Florence Foster Jenkins beforehand, I didn't think I'd enjoy being treated to an afternoon of off-pitch singing. How wrong I was! Meryl was magnificent as the barrel-sized would-be opera singer. I found myself feeling guilty for belly laughing at Ms. Jenkins' painful vocals, knowing how badly she wanted to be another Lily Pons. And I wasn't the only one in the audience laughing, either.

It reminded me of another film,The Producers – where Zero Mostel and Gene Wilder wanted to produce a bad musical, hoping it would be a flop so they could rake in the investors' money. Instead, it turned into a Broadway blockbuster. Same basic idea applies to Florence Foster Jenkins. For me, though, her popularity (albeit camp rather than coloratura) seemed to seriously stretch credibility. As did many of the other moments in this distinctly delightful film.

Kudos go out to British director Stephen Arthur Frears whose film credits include some of my all-time favorites: My Beautiful Launderette and Philomena. He was able to make an incredibly hard-to-believe situation mostly believable.