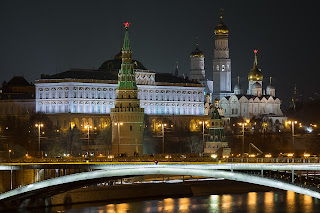 The cold war hasn't ended, it's just gotten more sophisticated, according to the premise of Red Sparrow. Lawrence plays a former ballerina turned Russian spy named Dominika Egorova. Not your run-of-the-mill spy, but a "sparrow," mind you--a highly trained seductress who can get what she wants out of anyone or anything short of a turnip. She is compromised by the Americans and becomes a double agent, but in the end her sympathies will be swayed toward one side. Like any good spy thriller, Red Sparrow keeps you guessing as to which side that is until right near the end.

To learn her trade, Dominika is sent to a Russian "whore school" where she and her fellow cadets, both male and female, practice the most degrading and appalling kind of sexual acts on and in front of each other--and when I'm appalled by something in the movies, you know it's pushing the envelope. Throw in a generous helping of gore as the twisty plot wends its way along, and you've got a film that stands out not for great acting or originality, but for those gratuitous elements alone.

RANT ALERT!
So here we have another "star vehicle" for Jennifer Lawrence. I find it rather obscene that a 27 year-old with journeyman talent is the highest paid actress in the world--more generously compensated than a Frances McDormand or a Meryl Streep. But then I  find it obscene when someone like Miley Cyrus can become a filthy rich mega-star simply for being obscene. Rome is fixin' to burn...

Now, back to our regular programming!

I've never watched a spy thriller where I didn't get lost somewhere along the way in the twisty plot. That's the nature of the beast, and Red Sparrow is no exception. You've got some of it, other parts you're shaking your head at and saying wha? Just make sure you're clear on who "Boo-Shay" is and you should be all right.

Interesting turns from Jeremy Irons, Charlotte Rampling, and Mary Louise Parker can't save a film where all the Russkies speak English only--for our benefit--in obviously manufactured Russian accents. Subtitles would have given it more of an air of authenticity.

What Red Sparrow has going for it is that it's whorry and gory--perfect for the average American taste--so if that's your cup o' vodka...drink up my friends!

(
As some of you already know, Tim writes his review first and then I add my two cents. (In this case, rubles.) Before I begin my rant, I must praise my co-writer for making this turkey of a film worth seeing. Why? If I hadn't seen it, I wouldn't have had the pleasure of reading Tim's very witty-yet-bitchy review!
Aside from nodding off during Red Sparrow, where slow doesn't begin to describe this movie's pace, I was totally lost throughout. So was my friend – who kept leaning over asking who was who and why were they doing what they were doing? Sure, thrillers are supposed to stump the audience until the very end. Sadly, I left the theater more stumped than ever!
The best thing about Red Sparrow? The casting of Matthias Schoenaerts as the villain. Why? His resemblance to Vladimir Putin is unmistakable. So many fine actors in cameo roles. Such a waste of great talent. But the one scene with Jeremy Irons made seeing this tautless thriller worth it. (Almost.)
In my movie reviews, I'm often hard pressed to find something to criticize. Such is not the case this time. I've already mentioned the slow pace, the confusing plot, the waste of talent. I might also add that director, Francis Lawrence, who also directed Ms.Lawrence (no relation) in The Hunger Games, has trouble cutting out unnecessary scenes that only befuddle the viewer. A cinematic hoarder, indeed!
In case you haven't figured it out yet, I hated this movie. And for the first time since I began adding my two cents, Red Sparrow merits the lowest grade I can give it.