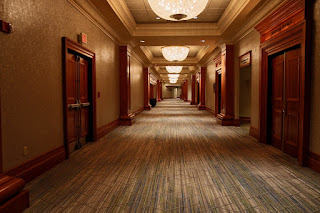 Bad Times At The El Royale is one wild-ass ride of a movie--if I may speak in the vernacular--a jigsaw puzzle that slowly assembles itself into what becomes a clear picture only near the end. It's not going to be for everyone, as evidenced by the older couple I saw getting up and walking out of the theater half way through...you could tell they just didn't get it, and didn't want to wait any longer to see if the pieces were eventually going to fit together.

It's the late sixties. Four strangers show up at a seedy and otherwise deserted Lake Tahoe hotel. The shaggy priest (Jeff Bridges), a cheeky vacuum cleaner salesman (Jon Hamm), a soul singing soul sister (Cynthia Erivo), a bored and uppity mystery woman (Dakota Johnson), and the slacker desk clerk (Lewis Pullman) make up our principal players. It doesn't take long to realize that none of them are really what they appear to be outwardly (including the hotel itself).  These are the surprises that develop along the way. And when what you think is going to be a major character gets taken out fairly early on, it's a wake up call that jolts you out of any notion of getting in a short catnap, and you say...ooookay... what's next???  Which is good because it carries you through a lot of backstory and some scenes that go on too long, most of which serve only to showcase the singing talents of Cynthia Erivo. It's what stretches the film to its bloated two hours and twenty minutes.

The more Bad Times At The El Royale goes on the more you can see it's getting ready to jump the tracks, and I was trying to think of another flick that gave me those same vibes and flashed on Dusk Til Dawn, a movie that had its moments but then got too crazy and went on for too long. Way too long.

Still, I've got to admire the effort of a film that shoots for the moon in a quirky art house kind of way, even if it falls short and ends up crashing back into the lake. Three quarters of the way through we're still pretty clueless as to where director Drew Goddard will ultimately lead us, until a villain (Chris Hemsworth) from outside the core group appears, and it's game on for a bloody Tarentino-esque climax. Through it all there's a message about killing that emerges--it's wrong no matter what the context or justification (as in war)--which has to be brought out, of course, through a lot of the same.

Jeff Bridges is the reason why we are here in the first place (I'm a fan) and he doesn't disappoint with his portrayal of the dissipated, hard drinking priest.

Dakota Johnson, who's made her name of late in the world of soft-core kink with the Fifty Shades franchise, tries for a step up in class here and accomplishes at least that much--after all she's in a Jeff Bridges film--and opted for a part where she keeps her clothes on the whole time!  .

Bad Times At The El Royale is fascinating in the way that a train wreck is fascinating. You can't look away. But that doesn't make it any less of a disaster.


JILL'S TAKE
I'm with the older couple who left early, Tim. Only I've never, in my life, left a movie before it's over. On principle. I kept musing all through this turkey that last week I saw 'the best film of 2018' (A Star Is Born) and now I'm watching 'the worst film of 2018.' There has to be another word for slow to describe this puzzling piece of cinematic drivel.... Sluggish? Stagnant? Snail like? Those synonyms don't begin to describe Bad Times at the El Royale.
The only thing I kept asking myself throughout was "What the hell is this movie about?" (I had to read Tim's review to get the jist of what director/writer Drew Goddard was trying to convey.) The descriptive blurb on IMDb also helped "Over the course of one fateful night, everyone will have a last shot at redemption - before everything goes to hell."
The only thing I really dug about this movie were the wonderful closeups of that vintage Wurlitzer jukebox. Made me miss the days when those music machines were housed in every restaurant and bar across America.
I also liked Cynthia Erivo's chops. Who is she, anyway? According to Wikipedia, she's a Brit who won a Tony (Best Actress in a Musical) in the Broadway revival of "The Color Purple." What a voice! Still. It wasn't worth the reduced price I paid. In my view, 'a bad time is what you'll get if you go to this mawkish mystery."
Grade: F
Posted by Timoteo at 4:07 PM No comments: 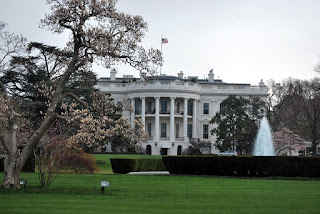 You pretty much know what you're going to get with a Michael Moore film. Hard hitting, wickedly humorous satire that will bite you on the ass if you're the butt of it. That's what I was expecting in his new documentary, Fahrenheit 11/9 (not to be confused with his earlier film, Fahrenheit 9/11...11/9/17 being the date when it was confirmed that Donald Trump had been elected president). And as Moore states so directly at the beginning, this film attempts to answer the question: How in the f**k did we get here?

I think that's the only time I even grinned during this movie. Moore strikes a deliberately somber tone here, and there is dirge-like music that seems ever present in the background, so you'll make no mistake where he is coming from. Because his message is that time is running out. That would be the time we have left to save our democracy--or what passes for one here in the USA--before we slide down that slippery slope into fascism.

You're expecting it to be a full-blown hit piece on Trump, which it starts out to be, and then the road takes a detour to Moore's hometown of Flint, Michigan and it becomes a hit piece on Governor Rick Snyder, whom Moore holds ultimately responsible for the polluted water crisis there.  He makes a compelling case, and it makes you wonder how this man stayed in office.

The democrats don't go unscathed either, earning Moore's scorn primarily for how the Hillary Clinton forces rigged the nomination process in her favor. There is plenty of blame to go around for how and why we got to where we are today.

Before he's done, Moore will hit on racism, gun violence, the loss of civil liberties, freedom of the press and more, while tying it all in with Trump again. But the juxtaposition of a Trump rally with a Hitler rally will add fuel to his critics who have branded and dismissed him as a radical.

We revisit the enormous march on Washington that resulted from the Parkland high school shootings, and the ballsy kids who organized it and spoke so eloquently at the rally. It's a powerful thing to watch on the big screen, and it strikes the hopeful tone (there's always one near the end of a Michael Moore film) of people power in action. But this time it comes with a dire caveat: Time is running out.

Let me start out by saying I'm apolitical to a fault. I'm also a big Michael Moore fan. I heard him speak once a few years back at a film festival in Sedona, AZ and love his acerbic wit. That being said, my biggest complaint with Fahrenheit 11/9 is its length. Come on, Michael... Two hours and eight minutes of dire warnings would make even the most rabid anti Trumpster squirm. I realize he had a lot of territory to cover. But audiences get weary after awhile....
Still, I must give this Michigan native high marks for his use of background music. My favorite bit (and this won't ruin the movie for you) was at the beginning. The music he chose for Hillary awaiting victory was uplifting, hip and high-spirited. Then, as Election Night progressed, we cut to Donald Trump somberly walking out on stage, accompanied by an equally somber family, to give his acceptance speech. What music did Michael choose for this moment? The famous aria from Leoncavallo's "Pagliacci." A brilliant move on his part!
But the movie is misleading. Even the poster with with a pudgy Trump hitting a golf ball and the subtitle "Tyrant, Liar, Racist, A Hole In One" makes you think it's going to be a hatchet job on our 45th president. Far from it. Instead, it's a hatchet job on the state of our country. Not a message that lends itself to humor. And I sorely missed that aspect of Michael's personality.
I also felt the ending was weak. I won't go into detail (out of respect for those folks who want to react in their own way) but for me it ended with a whimper rather than a bang.

Posted by Timoteo at 9:35 AM No comments: