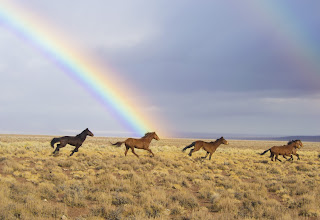 
To buy into The Mustang means you gotta buy into the BLM's policy of rounding up thousands of wild horses in western states. Most of them will spend the rest of their lives in long-term holding facilities, while a relatively select few will be trained in a prison program that matches inmates up with horses to break them, train them, and make them presentable for auction--with some of the animals going on to a career in  law enforcement and some going to the public. Personally, I think all horses should be wild and free. We should all be wild and free as well, running naked beside them. That's a Garden Of Eden scenario, but hey, I'm a throwback kinda guy.

So right off the bat, this was not going to be my kind of movie. It's extremely loud throughout a good portion of it--with loud rebellious horses...loud angry men...loud helicopters, etc. And it features a protagonist who's about as unsympathetic a character as you'll find. Roman (Matthias Schoenaerts) is an inmate at a Nevada prison with such extreme anger issues that he shouldn't be around anybody--man nor beast. But somehow he gets accepted into the horse training program run by crusty old wrangler Myles (Bruce Dern).

What follows is a battle of wills between Roman and his horse--and as it says in the trailers: "Some horses you can break, and some you can't." It's a fairly predictable story of redemption for Roman, who finally comes around to showing his human side in an emotionally charged meeting with his young pregnant daughter--trying to make amends to her for his past misdeeds. The trouble with this character study is that it's only vaguely alluded to that he brutally beat his wife and daughter's mother and made her something of a vegetable, requiring long-term care. But we never learn what makes this ticking time bomb tick. There's no back story. Had we learned that Roman was also abused, as most abusers are, I could have felt something for him. As it is, he's just a loose cannon who gets into a fight with his horse...punching the horse, and getting trampled for it as his just desserts.

Bruce Dern is in his element here as the curmudgeonly old horse trainer who keeps giving Roman second chances. Schoenaerts is convincing--maybe too convincing--in his role. If I'm going to be totally objective, I have to acknowledge that The Mustang is a very well made film in terms of acting, cinematography, realism, and so on. But personally, I didn't enjoy it. This film rips your heart out, and not in a kind or gentle way. It's sad for the horses, because they're not wild and free. It's sad for the inmates, because they're wild but not free. But the real life program The Mustang is based on reportedly has had a transformative effect on many men when they are reintegrated into society.

As a consummate lover of horse movies from Thunderhead (1945) to Black Stallion (1979) to Seabiscuit (2003), I was not disappointed with The Mustang. In fact, I was blown away by the story, the cinematography and most especially Matthias Schoenaerts' performance.

Have you ever watched an actor that you're unfamiliar with and, after seeing him, feel compelled to look up every film he's ever been in? Such was the case with me and Matthias Schoenaerts. A few weeks back, I watched a 2014 film titled A Little Chaos on Netflix. About King Louis XIV's chief landscape architect played by Schoenaerts, who falls in love with a commoner (Kate Winslet) hired to help design a lavish garden at Versailles. I was so moved by Schoenaerts' acting that I had to find out more about him. I didn't remember him in The Danish Girl(small part) and his other films were ones I hadn't seen – or didn't remember seeing. (Rust and Bone,Bullhead, Red Sparrow). Life went on and I soon forgot all about this Belgian-born hunk.

Until I saw Mustang.

If this film had been released closer to Oscar nominating season, I'd bet my last euro Schoenaerts would be up for a Best Actor award. And if they gave those gold statuettes to animals, I'd cast my vote for Marcus the Mustang. I was also impressed by female director Laure de Clermont-Tonnerre's handling of this very male movie. Last but not least, I applaud Ruben Impens' brilliant cinematography. The aerial shots at the beginning were breath-taking as well as emotionally heart-wrenching.

So what didn't I like? The secondary plot about drugs and nasty cellies was, for me, a cliche and totally unnecessary. When there's an animal in a film, who cares about secondary plots? The Mustang is not for everyone. But if you decide to see it, I guarantee it will make a lasting impression on you.