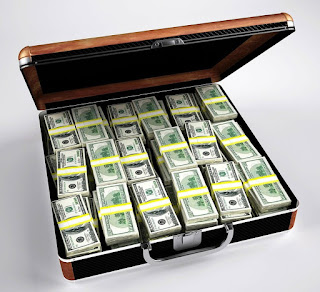 It's 1973 and John Paul Getty III (Charlie Plummer), grandson of the then richest man in the world, J. Paul Getty (Christopher Plummer--no relation), has been kidnapped off the streets of Rome. A ransom of 17 million dollars is being demanded for the teenager's safe return. Only problem is, the old tight-ass doesn't want to fork over one penny, even though it would be a drop in his bucket!  This naturally doesn't set well with Paul's mother, Gail (Michelle Williams), who will spend the entire film trying to save her child's life, with the help of former CIA operative Fletcher Chase (Mark Wahlberg), who has been directed by the elder Getty to figure out another way to rescue the lad without dipping into his precious coffers. Easy for him to say.

I might have been one of the few in the audience who could generate some empathy for the old guy. Few situations are ever black and white. Getty had stated: "I have fourteen grandchildren, and if I pay a penny of ransom, I'll have fourteen kidnapped grandchildren." He had a point. Not to mention that the family and the Italian police thought Paul might be faking his own kidnapping to get funds out of grandpa that he thought he deserved. J. Paul Getty was one of the foremost art collectors in the world, and I think it was what he said about art: that it never disappoints you like people do (he was married and divorced five times) that provided a hint in the direction of explaining the man as being deeper than what showed on the surface, though the movie never quite takes you there.

Christopher Plummer does a sterling (pardon the pun) job of turning J. Paul Getty into the man you love to hate--a turn made even more notable by the fact that it was done on short notice to replace Kevin Pervy...er...I mean Spacey.  Plummer and Michelle Williams--who's always right on the money--are what raise this film above your run-of-the-mill action/thriller.  Along with a collection of Italian thugs so authentic looking you can almost smell the garlic.

Whether it's Michael Douglas' portrayal of Gordon Gekko in Wall Street ("Greed is good") or Christopher Plummer's turn in All The Money In the World, audiences love to see how the rich get richer. (And ultimately get screwed.) Although this movie lagged in spots, it held my interest 95% of the time. And I couldn't help musing that the recasting of 84-year-old Christopher Plummer as the tightwad tycoon was a stroke of pure genius. Kudos go out to screenwriter David Scarpa who managed to create a well-rounded portrait of this very complicated, power-driven art connoisseur.
Without giving too much away, I want to share what I felt was a wonderful twist: one of the sleazy kidnappers (played brilliantly by Romain Duris) begins to develop a relationship with his prisoner. At first, he's a typical Italian gangster, ready to do whatever it takes to get the boy's grandfather to pay the ransom. Over time, however, we see his attitude change. I know it's been done before in films but Duris' characterization was truly noteworthy. For you trivia buffs and acting hopefuls, I looked him up on IMDb and discovered the following: "Appealing actor Romain Duris is the exact example of those who arrived in the movie industry by chance, and to stardom without really desiring it. Discovered by a casting director while he was waiting in front of a high school in Paris, he was offered a role." (Some people have all the luck!)
If I were to nitpick about Money, it would be about young Getty's other siblings who appeared briefly and then completely disappeared. I would've like to have seen how they handled this horrific situation. Nothing major, mind you. But you don't introduce a family-in-crisis and then simply delete some of its members for expediency.
Beautiful score by Daniel Pemberton...breath-taking cinematography thanks to Dariusz Wolski. It's a movie well worth seeing.

Posted by Timoteo at 10:24 AM No comments: Links to this post