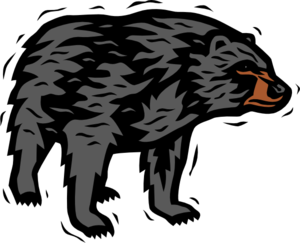 The best and most technically impressive scene in The Revenant comes early on when Leonardo DiCaprio's character, Hugh Glass--one of a cadre of 19th century fur trappers out in the woods slaughtering animals for fun and profit--gets mauled by a gigantic CG bear from hell. Not just mauled, but f--ked up to within an inch of his life. Any normal person wouldn't survive. But this is DiCaprio, the star of the film, so we know he's going to pull through. And that's a big flaw in terms of killing any suspense there might have been as to the ultimate outcome of the encounter.

Glass recovers in achingly protracted fashion, and sets off to find the man--John Fitzgerald (Tom Hardy)--who left him out there for dead in the snow. It's a simple tale of survival and revenge--a grisly, bloody, ultra violent tour-de-force from director Alejandro Inarritu, who is shooting for his second Best Picture Oscar in as many years. (Birdman in 2014).  But if non-stop gore isn't your cup of tea and you're looking for something of more depth, I suggest you see Brooklyn instead.

The Revenant is also nominated in a slew of other categories, including Best Actor for Leonardo DiCaprio. If there were an Oscar for grimacing, grunting, groaning, spitting up and straining to speak unintelligibly, DiCaprio would certainly deserve it.  If there were an award for physical exertion, he'd deserve that as well. And if there were a Best Performance While Gnawing On Raw Animal Flesh...he would win hands down!  But Best Actor? Not this turn.

Oh, and I sat patiently through the entire scroll of credits at the end--nearly as long as a short film in itself--waiting to see the reassuring "no animals were harmed" notation at the end. It didn't appear. Never a good sign.

Sometimes, when I see a film, an actor's performance makes me say to myself (or the stranger sitting next to me!), "That actor's gonna win an Oscar!" I felt this way about Tom Hardy in The Revenant. He was as deliciously villainous in his role as Anthony Hopkins was in Silence Of The Lambs. If it had been back in the days of silent movies, I'll bet the audience would've been booing him in every scene. Alas, his competitors in Best Supporting Actor this year (Christian Bale, Mark Ruffalo, Mark Rylance and Sylvestor Stallone) will probably prevent Tom Hardy from winning. But he definitely deserves the award.

As for The Revenant? A brilliant film deserving of the 12 Oscar nominations it received. Grunting and mumbling aside, Leo's performance in this 156-minute film is certainly Oscar-worthy. If for nothing else, his physical stamina. I personally liked the fact that it took so long—in cinematic terms—for him to recover. And in that time, we were treated to some of the most visually stunning nature photography I've ever seen. It's nearly impossible to believe that this same director filmed Birdman -- which took place largely in dressing rooms and on stage.

I can't heap enough praise on this movie. And when DiCaprio accepted his win at The Golden Globes ceremony, I was gratified to hear him thank all the Native Americans that helped make the film possible. I'd like to come up with a criticism, no matter how minor, but I'm finding it difficult to do. Perhaps the title could have been less obscure. A friend told me it meant "someone who seeks revenge." But when I looked it up, the definition read: "a person who has returned, especially from the dead." Either definition works. But obscure movie titles aren't my thing.