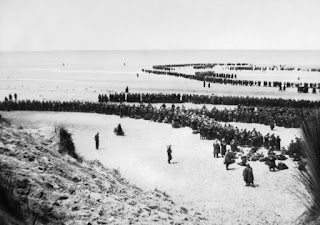 
Imagine one long scene--an action/battle scene--that runs for nearly two hours nonstop. That's Dunkirk. So if you're expecting a little romance or character development to give you a break to catch your breath...forget it! Dunkirk hits the ground running and never lets up, and for edge-of-your-seat adrenaline junkies, that's a good thing.

A mini history lesson. The Miracle of Dunkirk--as it would come to be called--refers to the evacuation of allied soldiers hemmed in by the Nazis on the beaches of Dunkirk, France in the spring of 1940. Over a period of eight days, more than three hundred thousand troops were rescued by a fleet of over 800 civilian boats and merchant ships of all shapes and sizes. They raced to the rescue as the German Luftwaffe bore down on the trapped men. The Royal Air Force engaged the German fighter planes and bombers, contributing to the success of the operation.

What characterization that exists in Dunkirk follows three main threads: A British soldier (Fionn Whitehead) who in the beginning helps a comrade bury a body in the sand. We follow their resourceful fight for survival; a teenage deck hand (Barry Keoghan) who clambers aboard a boat piloted by an older man and his son as they head into harm's way, selflessly hoping to make himself useful; and an RAF Spitfire pilot (Tom Hardy) whose dizzying aerial dogfights with the enemy are perhaps the most riveting sequences in the film. We're right in the cockpit with him, and the emoting is accomplished primarily through facial expression.

RANT ALERT: Dunkirk is loud. I said, DUNKIRK IS LOUD!!!  (Results may vary in your area.) The CRASH-BOOM-BAM of Hans Zimmer's overbearing soundtrack never lets up. That together with bombs going KABOOM and artillery fire going RAT-A-TAT-TAT and torpedoes going...

You get my drift.

It's a literal assault on the senses. (Oh my virgin ears! as we used to say in high school). I suggest earplugs--seriously--especially if you see it in IMAX, and you should, to get the full effect. (Why should I be the only one to suffer?)  In my case, the problem could have been mitigated by theater management who didn't have their heads up their you-know-what. They could have made some adjustments to the decibel levels that are already way too high to begin with for just regular films. But I can now see that most moviegoers of a certain age are already half deaf from being in the front row at concerts by Led Zeppelin and The Who. And the teenagers in the theater are unfazed by anything. So nobody walked out. But after the film I overheard one lady say that somebody should complain to the management. I can see it now. She's standing there trying to tell them about this decibel issue, and they are going,  WHAT? WHAT???

To quote tennis legend John McEnroe, "You cannot be serious, Tim!" (I added the last word.) The sound levels in the theater I saw Dunkirk in were manageable. And that's about the ONLY positive thing I can say about this meandering, tedious film. The first fifteen minutes could have easily been cut and nothing of consequence would have happened. We know that thousands of British troops were trapped on the beaches waiting for a miracle because we are told this in a typed message on screen. Not once, not twice, but three damn times. (At first, when this happened, I thought there'd been some technical difficulties, i.e. that the studio had sent a faulty CD.)

Okay. So it's a war movie with the makings of a brilliant plot thanks to history. Only problem? Too many threads and not enough cohesion.Dunkirk was peppered with famous actors with cameo parts, a sure sign for me that a movie is in deep doo-doo. Kenneth Branaugh, Tom Hardy, Mark Rylance — who at least has a decent part. But like war itself, the cuts are messy, the message muddled, the battles bloody and untidy. Still, I say, "Where's JohnWayne when you need him?" Without anyone to root for—except history—I got bored. I only cared about Rylance's character Mr. Dawson and his tension-filled trawler. The blame for this, I place squarely on Christopler Nolan, who both directed and wrote the script.

To quote IMDB's bio of Mister Nolan, it reads: "Best known for his cerebral, often nonlinear storytelling...." I couldn't have said it better myself. And after the movie let out, I saw a man wearing a t-shirt that read: "Go to hell cuz I'm going to Texas!" I figured the guy would certainly have something to say about the movie so I asked him. In typical Texan fashion, he had just three words: "I was bored."

But if you want to see some breathtaking, belly-wrenching spitfires in action, get thee to the nearest screening of Dunkirk. If you're lucky, the deafening noise will make up for all the movie's flaws....

Posted by Timoteo at 8:46 AM No comments: