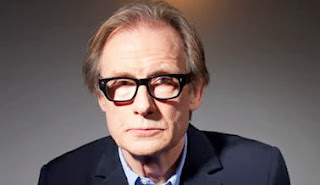 
Cross Groundhog Day with The Time Traveler's Wife and you get something called About Time--with much of the humor, cleverness, and charm of the former, and a little of the head spinning stay-on-your-toes-and-try-to-keep-up aspect of the latter.

The romantic lead,  Domhnall Gleeson, is no Hugh Grant-- the common denominator in previous Richard Curtis faves such as Love Actually, Notting Hill, and Bridget Jones's Diary.  He's an average looking bloke, but he grows on you.

Born into a well-to-do English family, Tim Lake (Gleeson) has just turned 21, and it's time for the fatherly talk from dad (the irrepressible Bill Nighy) on the subject of stepping out into the world. But it's not what Tim is expecting. Dad informs him that the men in the family have always had the ability to travel through time, and Tim has it too. He can't change the world in any monumental way--just his own personal experiences.  So naturally, Tim takes advantage of his newly found abilities and zips back to a crappy New Year's Eve party where he failed to kiss the girl...and...kisses the girl. Hey, this works! You pretty much know  where it's headed from here. Tim uses time travel to find the perfect girl, (Rachel McAdams) fall in love, and make the events of his life work to his liking. Except every act creates some kind of karma, so he finds himself having to go back and tweak things here and there, with consequences that set the theater audience laughing uproariously or wiping away a little tear.

Love Actually is on my top ten favorites of all time list. So I was eagerly anticipating About Time. It's not a perfect film. It's overly long--a little over two hours--and not in the way that leaves you thirsting for more. It could have easily been condensed by twenty minutes and the movie would have been less wobbly on its feet.  As it is, it's not so much a story as it is a saga. And the theme that kept coming into my mind--whether it's moral to manipulate people and events to one's own advantage without informing them of what you've done--is not explored.

But About Time has all the hallmarks of any feel-good Richard Curtis film, and despite its shortcomings, (or long-comings) profound life lessons are imparted, and your spirits will soar.

Feel-good, schmeel-good. When a film presents a premise such as being able to go back in time, I don't like it when that premise gets tinkered with halfway through the movie. I won't bore you with the details of how it gets tinkered with (and why the final turnaround doesn't make any sense). Suffice it to say that neither Tim nor I could justify the obvious inconsistencies. Clearly it didn't bother him. But me? I'm more anally retentive than that. Still, it was—as the Brits would say—a rollicking romp of a movie.

Of course I have a secret crush on Bill Nighy ever since I saw him in "The Best Exotic Marigold Hotel" – which I hear is slated for a sequel. And he is utterly charming as the head of a rather bizarre household that includes an uncle whose suits are tailored to a fare-thee-well but whose conversational skills leave a lot to be desired. Rachel McAdams is a treat to look at and personally I found it hard to believe she'd fall for a geeky-looking guy like Tim. (Hugh Grant, yes. But Domhnall Gleeson? 'Fraid not.) In researching her other films, I found it rather amusing that she was paired with yet another time-traveler (Eric Bana) in "The Time Traveler's Wife." I didn't hate ABOUT TIME. But compared to other Richard Curtis' offerings, I was disappointed.