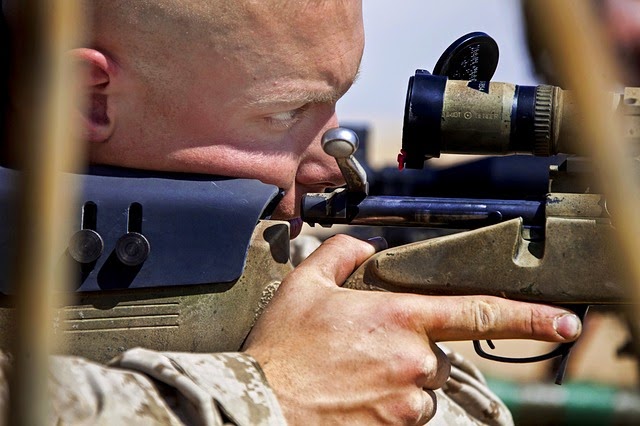 Knowing Clint Eastwood's politics, I knew going in that American Sniper was going to portray its subject as a hero and true patriot, and that is pretty much what we get. Eastwood apparently doesn't go any deeper than my-country-right-or-wrong--the Dick Cheney credo of the end always justifies the means-- and that the world is made up of good guys and bad guys and very little in between (like in those spaghetti westerns of his early career) and thus anything is permitted, and justified, if it eliminates the bad guys.  (Of course, the more we do that around the world, the more "bad guys" keep popping up in Whac-A-Mole fashion to threaten us. What's up with that?)

Chris Kyle (Bradley Cooper) was a Navy Seal sniper with 160 confirmed kills (men, women, and children) to his credit during the Iraq war. (To be fair, those women and children were allegedly acting in threatening ways, like attempting to blow up some of our troops.)  There is no Iraqi in this movie that isn't portrayed as some kind of potential threat. The ones who have taken up arms against us are "savages," so dispatching them can be done without a whit of soul-searching. They become mere stick figures--like the anonymous war-whooping Indians getting picked off one by one by the "good guy" cowboys in the western films many of us grew up with.  Okay, there is one scene where Kyle has his sights trained on a young boy who is about to pick up an anti-tank weapon and do some damage with it. The sniper sweats and grimaces, and begs under his breath for the kid to put the weapon down so he doesn't have to shoot him. This is supposed to show us that Kyle has a conscience. That runs contrary to the real guy's assertion that killing was "FUN,"  and his unsubstantiated claim that he had murdered looters during hurricane Katrina. So draw your own conclusions about that.

Technically, American Sniper is superb. The combat scenes are among the most realistic I have seen. But they go on and on and on, covering Kyle's four tours of duty, and after a while you become numb watching them, and ultimately bored because of the tremendous overkill (pardon the pun). I can't imagine anyone but 14 year-old boys addicted to playing war games on Xbox being avidly engaged with this kind of stuff all the way through. And that is where Eastwood misses the mark. He gives us an out and out action movie, where a little balance, by examining some of the moral and psychological aspects of it all, would have made it a much better film.

To the director's credit, he does give some cursory play to  the effects of PTSD, and how it affected his subject and others returning from the battlefield. Perhaps numbing us out with all the violence in American Sniper is supposed to make us draw a parallel between that and the numbed out Chris Kyle, whose social skills had departed, and he could no longer relate to his family or people he would meet when he was back home. There is a scene at a picnic gathering where we observe what a ticking time bomb the man had become.

Speaking of which, I fear we are becoming a nation of numbed-out voyeurs, inured to the violence we see, and so we keep increasing the dose of the drug just to feel something. American Sniper does that by ramping it up and feeding into our insatiable appetite for blood (maybe that's why vampire flick are so popular) that we drink up on television, on the movie screen, and in the news. It's a sick obsession, but those with mental health issues rarely recognize it themselves until someone points it out. And so the image of the female breast in a movie continues to be blurred out when it shows on TV, but all the grisly blood-spattering-against-the-wall scenes of murder and mayhem are fine and dandy.

As for this film, I can't give it a pass based on technical merit alone. Not when Clint Eastwood fails to examine the complicated issues involving real HUMAN BEINGS on both sides of the conflict, or the reasons why we've been drawn into this war of ideologies--with no end in sight--in the first place.

After that rant, who'd have the balls to disagree? Me. But not by much. Unlike my co-writer, I feel Clint Eastwood did take the time to explain why psychologically Chris Kyle was such a patriot-turned-killer. At the very beginning of the film, we witness a scene at the dinner table where Kyle's dad gives a speech to his two boys about lambs versus wolves. This dad reminded me of another tough-guy Marine played so brilliantly by Robert Duvall in The Great Santini. Before signing up to go to war, we see Kyle as a rodeo rider/wannabe cowboy and it's easy to assume he's seen every John Wayne movie that ever existed.

I'm not here to judge the rightness or wrongness of war. It's a movie, after all. Based on a best-selling book. As a movie, I felt it was overly long. By Kyle's fourth tour of duty, I was nodding off despite all the blood and bomb blasts. Still, it made me understand why so many soldiers return from this craziness and commit suicide. (The numbers are truly staggering.) Back to the film and Bradley Cooper's perfomance. I'm told he gained 35 pounds to play the part and he was certainly convincing as both a fearless sniper and a zoned out husband. I don't, however, think he deserves an Oscar. Not compared to the other contenders.

As a TV watcher, I had to giggle at cameo appearances by Eric Close as DIA Agent Snead (he plays the mayor in Nashville) and Jonathan Groff as YoungVet Mads (he's a gay man, eager to get laid in HBO's Looking). That's the problem with being a regular on TV: it's jarring to see that same actor in a different role. Be that as it may, I didn't hateAmerican Sniper. Or get emotionally upset by its content. Maybe I should have. But war has -- and always will -- provide us with many an Oscar-winning film.

Posted by Timoteo at 7:43 PM No comments: Links to this post