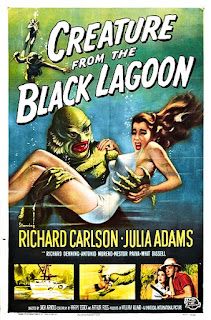 Elisa Espisoto (Sally Hawkins) is a cleaning lady who hears just fine but doesn't speak. She works at a secret government lab that is housing an "Amphibian Man" who looks a lot like the Gill Man from Creature From The Black Lagoon. The merman was captured in the Amazon by government agent Strickland (Michael Shannon), who gets his kicks by abusing the poor thing with a cattle prod. (Fish Guy gets a measure of revenge by biting off a couple of Strickland's fingers.) The evil fed wants to kill the amphibian (played by Doug Jones) and study him like a dead frog in a biology lab. Strickland is opposed by scientist Robert Hoffstetler (Michael Stuhlbarg), who wants to keep the scaly being alive. It's 1962--in the thick of the cold war--and a subplot has the Russians trying to get their mitts on Amphibian Man for their own nefarious purposes.

Elisa, being an outcast herself, repeatedly sneaks into the chamber (security seems to be really lax for an "asset" of this magnitude) where the creature sits in a tank tethered by a chain around its neck. She and Amphibian Man hit it off right away. Cut to the chase: An escape plan must be hatched, as the creature's days are numbered. With the help of Elisa's unemployed artist neighbor (Richard Jenkins), and her co-worker Zelda (Octavia Spencer), she springs the fishy dude from his confines (like I said, security is really lax) and takes him to her abode. That's where the real fun begins, as Elisa ends up naked in the shower with him and discovers he's a lot more like a regular guy than meets the eye!

Okay...The Shape of Water is a fantasy, so anything goes. But to buy into it hook, line and sinker, the willing suspension of disbelief must kick in. That was hard for me because Amphibian Man looks sorta like Frankie Valli in a wet suit with barnacles hanging off him. At no point are you going to think it looks like anything but an actor dressed up in a cheesy rubber costume--a la those laughable creature features from the fifties. The only reason I can imagine why  director Guillermo del Toro--in this era of CGI wizardry--chose to go this low tech would be as a way of paying homage to that era of cinema, which he seems to love.

But The Shape of Water does have its visual delights, and one of them is Sally Hawkins. They've got her made up to look really plain--as befitting a lowly toilet cleaner--but they couldn't hide her light under a bushel for the whole movie, and that becomes abundantly clear when she strips down for the steamy shower scene.

There are aural delights as well, with a big band flavored soundtrack from Alexandre Desplat. There's Andy Williams, the Glenn Miller Orchestra, and a silky rendition of "You'll Never Know" from opera singer Renee Fleming.

Nice touches...but not enough to make me gush about this movie.

JILL'S TAKE
Finally. Tim and I disagree! I found The Shape Of Water to be absolutely brilliant, even Oscar-worthy. (Hell, it's already nominated for seven Golden Globes.) For starters, the opening underwater sequence deserves a special award for its dank and delightful originality. I was not prepared to like this film since sci-fi and/or fantasy is not one of my favorite genres. But I'm so glad I allowed myself to see it!
The girl I went with, a visitor from Oregon, liked it too. But afterwards, she mentioned how similar this creature was to the creature in Hellboy. I later looked up that movie and was blown away by the physical similarities. And the fact that both films were directed by Guillermo del Toro!
I do agree with Tim about the lax security. But by then, I was hooked on saving the poor creature from any more cattle-prodding. And since Tim gave away the finger chomping bit, another friend pointed out how the smell of rotting flesh would have been apparent to both Agent Strickland and anyone else long before those blackened digits departed. Sure, there were a lot of implausible scenes in the The Shape of Water but romances between humans and non-humans have worked for a long, long time. (Beauty and the Beast, Phantom of the Opera, King Kong, etc.)
The Russian plot was, for me, unnecessary. But I did find it interesting that the roles played by the two Michaels (Shannon and Stuhlbarg) were reversals of the roles they played in the HBO series "Boardwalk Empire." In that one, Stuhlbarg played mafia boss Arnold Rothstein and Shannon was a bumbling FBI agent. And Richard Jenkins, who never turns in a bad performance, was superb. (I wept for him at the end.)
Grade: A


Posted by Timoteo at 12:06 PM No comments: Links to this post